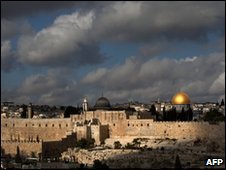 The shroud was found near the Old City of Jerusalem

A team of archaeologists and scientists says it has, for the first time, found pieces of a burial shroud from the time of Jesus in a tomb in Jerusalem.

The researchers, from Hebrew University and institutions in Canada and the US, said the shroud was very different from the controversial Turin Shroud.

Some people believe the Turin Shroud to have been Christ’s burial cloth, but others believe it is a fake.

The newly found cloth has a simpler weave than Turin’s, the scientists say.

The body of a man wrapped in fragments of the shroud was found in a tomb dating from the time of Jesus near the Old City of Jerusalem.

The tomb is part of a cemetery called the Field of Blood, where Judas Iscariot is said to have killed himself.

The researchers believe the man was a Jewish high priest or member of the aristocracy who died of leprosy, the earliest proven case.

They say he was wrapped in a cloth made of a simple two-way weave, very different to the complex weave of the Turin Shroud.

The researchers believe that the fragments are typical of the burial cloths used at the time of Jesus.

As a result, they conclude that the Turin Shroud did not originate from 1st Century Jerusalem.

The Turin Shroud has been the subject of much controversy.

Tests 20 years ago dated the fabric to the Middle Ages, but believers say the cloth bears the imprint of a man’s face that is an authentic image of Christ.