Mundane repetitions
…Day flipping to another day
One series cascading over and over
…So many similarities
As one day passes to the next.
…Where did my enthusiasm go?
When did the fun tuck tail and run. . . away?
…Happened so gradually
Almost imperceptibly. . .
Maybe its just my mood today
…Or this minute. . .
Maybe tomorrow will dawn brighter
…and I will feel rejuvenated. . .
Perhaps all society at this moment
…Is going thru the same phase
Or its just my personal phase.
Maybe winters gloom. . .
I am afraid to take my slumber
…Or afraid that it wont come.
Afraid that in the morning
…It will start all over. . .
Caught in an endless time loop.
And will there be a tomorrow?
…And what of tomorrow?
Tomorrow?

Looking into your eyes
In the night

Like a cat’s glow
Creeping…
Eyes full of love

Looking into your face
In the daylight…

Light as a cat prancing…
Mischievously…

Looking at your walk
In the evening times…

Longing to capture
Each mood that cascades

Across your face…
Dances in your eyes
Entices me to

Look into my eyes

The first time the leader of the colonization effort dreamed of the ancient ones and their city was his third night on Mars.

Lazarus 10 had delivered the initial wave of human refugees to Mars as planned. A long, hideous trip, with only a hydroponics garden to keep them occupied; give them more air. They also had spores for eventual transplantation along with, hopefully, as much of humanity as possible on Mars. The object: start to terraform the planet for future ships; as many had time to leave before there was no more time. There were no plans for returning. For now and the foreseeable future it was a one way trip. The pioneers had been given all the tech and supplies possible to survive and start the process, but those who saw them off knew humanity’s chances were poor.

Lazarus 10 landed near the ice cap and immediately started melting ice for extra water: purifying and altering what they needed to. Of course they lived in the ship which was also built to serve as home; until they could, hopefully, find a way to terraform Mars. The first goal: build up the atmosphere and warm up the planet. They had mostly just theories, tools and a few long range scout ships that could tractor ice asteroids for hydrogen and water importation. They would also start setting up mirrors in space to raise the temp a tad. They had a few mostly computer tested ideas what to do about solar winds and the magnetosphere.

They knew it was going to be a bitch.

It was, until he had the first dream…

He dreamed of a city. Ancient beings; tear drop shaped eyes: almost paper thin, gray, wrinkled skin… everywhere: flying, walking, resting. Much like some lizards, when they spread their arms they could glide from tower to tower in a martian city that had long since only added to the red rust color of the martian sands. One of the the beings noticed him; smiled a crooked smile… reached down into a fertile planet soil and handed him the sand that now was covering Mars. Then the ancient one pointed to the spot where he had dug, which looked like one of those many, small, odd clumps of red sand that seemed to literally be littered around the planet. He had noticed one right in front of the ship after they had landed but had paid it little attention. Martian-man made a flipping motion. Sand held up in the palm of a hand with three fingers seemed to sprout life right away. Plants that would feed the settlers. Plants that pumped oxygen into the thin atmosphere. Plants that helped warm the planet.

The next morning he left early, hoping no one would see what he was about to do. He donned his space suit, went outside, and dug into that clump, because he didn’t want his crew to think their desperate situation had driven him bonkers. He found what looked like fertile soil a few feet down.

He took a chance.

The stuff was miraculous.

Every night. Same dream, except what they showed him. He started telling his crew members about his dreams of the ancient ones and their city. They all helped do whatever the dream suggested they do. Why? Because the dreams were never wrong.

At first they thought their captain must be having fits of sleep organized intuition: the mind working out problems through a vehicle called “dreams.” By the time they realized somehow their leader must be in contact with Mar’s distant past they had moved onto the surface and had used building material sent with them to build homes: with the help of ancient martian tech… discoveries brought to him by his dreams. While all structures were sealed, it became obvious that the very activities they were participating in were terraforming the land far faster than anyone imagined. Soon they would be able to live outside with only a little help; heavy jackets, breathing aids. If things kept going, humans would eventually be able to live out in the open on Mars with no aids; light jackets on warm days, very heavy on the more tolerable cold day.

Hopefully… because they knew sooner or later the Earth’s surface would be uninhabitable. The gentle blue orb that glided through space would soon become an unfamiliar, far more harsh, world. Earth was going through another time of violent change; as Earth had many times before. Humans just didn’t quite realize just how short their time was. Maybe in a few hundred thousand years or more; when things settled down, they could go back… if Earth didn’t wind up like Mars. Either way; leaving or dying would soon be the only option for all.

So if they were going to be ready for the massive; inevitable, most likely suicidal, exodus coming to Mars, they would still needed more help: more hands to make the necessary changes.

In his next dream a martian guide led him deep into an underground cavern where he was shown millions of martians, just like the ones he dreamed of in the city, only they were in pods: some kind of cryogenics or stasis field fueled from some source deep within the planet. While he dreamed he also wondered… “Maybe what was left the the once far more active martian core?” The dream stopped when he woke the ancient ones up after his martian guide had shown him how to do it.

So he told his people about the dream, and then sent many of them to dig out where the cavern was supposed to be. It would take a while. Once they found the pods they had orders to wake them up just like his martian guide had shown him in the dream… if they found any martians at all.

Hopefully more help, wiser help, just in time for the first wave of human settlers: ancient ones and humans rebuilding Mars, together.

Many nights later he dreamed he was having some kind of odd beverage with his martian guide who was thanking him for saving his people. In the dream one of the settlers came in to ask a question, but stood politely waiting for the martian to stop speaking. Then the martian in his dream said, “Many, many years ago, we saw your planet was starting to sprout like ours is now. We hoped another sentient species would develop and maybe come here. We took an even bigger chance than Earthlings did. So thank you again. You revived the surface of a planet that we abandoned because it had become like yours millions of years later: volatile. And now you have brought us; and will continue to bring us, the only other thing we will need.” In the dream the martian stood, turned; and opened his mouth wide: biting clear through the settler’s arm as the man screamed. As he chewed; a horrific smile on his martian face, the ancient one started to pass what was left of the arm over the leader of Earth’s colonization effort as if to ask if he wanted a taste too.

The leader woke up in a sweat and with a feeling called terror that seemed to fill every cell of his body. He knew, without a doubt, that they had made a terrible, horrible, mistake.

And that’s when millions of hungry martians swarmed up and out: gliding down from the mouth of the cavern, and into the camp. Deep within the cavern

Evil Loose in the World

There’s evil loose in the world
Not the Biblical, Old Testament evil,
Rubbing its hands together —
Satan need not be bothered.
This is the work-a-day, average evil,
the kind that thinks:
“The only way I can get mine,
Is to take what’s yours.”
And the world itself
Is its mother and father.

The evil of power
Under the banner of deceit
The expression of power
In its true state:
“Make others do that
Which they hate.”
The only way the powerful
Can prove to themselves
They have real power.
But it’s not even enough
Just to make the peasantry
Cringe and cower.

The kernel at the core
Is that others must die
To prove power to itself
The never-ending fable
Yet the suffocating need,
The bottomless belly always needs filling
By the main course
On misery’s table
The two greatest, most harmful
Addictions in the world:
Power and greed
The two things which most disable.

Yet rarely are those who seek power
Questioned at length ‘why?’
(Perhaps because they control
The interrogation;
It’s impossible to be unbiased
When the beam is in your own eye.)
And greed must
Burn the street black
Before anyone notices
This fire-breathing dragon,
Scaly and coarse,
Sucking the soul out of
Life and limb,
Turning a walk in the park
Into a marathon at the
Rat-race course.

What religion does not require
Suffering and sacrifice
As the toll of an
Unyielding King?
Does not rely on
Obedience and money
For its existence,
The essence of its being?
What earthly institution
Does not compel
Compliance and fealty
As its due?
Feeding its gaping reflection of
Raw power,
On the hypocritical coin of
Mammon to renew?

Why isn’t greed
A recognized disease?
Lust for power
A capital crime?
Certainly the effects are as
Terrible from either
As any scourge of our time.
But then both are
Too strong a lure,
Preventing those who suffer
With the sickness
From ever finding a cure.

Until these twin blights
Of human history
Are treated and tamed
The tree’s roots will remain infected,
The fruit rotten, the heart lame
And the Devil will sit
With his feet up on the desk,
Nothing to do
But laugh at our illusions,
As we ruin ourselves without his help,
Eyes closed and hands grasping,
Trying to mold the universe
To our avaricious delusions.
_______________________________________
Copyright 2002-2009
R.S. Janes
All Rights Reserved. 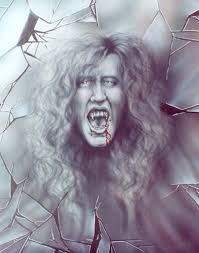