The January Club meeting will be held at Ozone Pizza at 4:00pm on Sunday January 17th. Bring Beer!

The Club’s website now has a revolving calendar that shows the upcoming months and has a link to previous months. It will be updated shortly with known events throughout the year. Please take the time to go to the site and familiarize yourself with it http://www.escambiabayhomebrewers.org/. The Happenings tab shows the future and past events that we have participated in. We will be adding to the website throughout the year to enhance its content. Let us know if there is anything you’d like to see on the site that isn’t currently on it.

The grain orders will be available for pickup on, or after, New Year’s Day.
END_OF_DOCUMENT_TOKEN_TO_BE_REPLACED

What the New Year Demands

“…many on the American Left insist that an FDR-style Obama could have rallied the masses and overwhelmed the entrenched powers-that-be. But that is magic thinking, because the Left lacks a political/media infrastructure that could support any politician in such an endeavor.”

The U.S. political battle lines for 2010 are already clear. Despite having caused many of the severe problems the country faces, the Republicans and the Right are again in the ascendancy, having shifted the blame for most of the troubles onto President Barack Obama and the Democrats.
END_OF_DOCUMENT_TOKEN_TO_BE_REPLACED Every year the F.X. Matt Brewery; who brews the Saranac line, packages a 12 pack of 6 winter beers. (They also sell a similar summer season 12 pack.) Matt has brewed well over 100 different styles and specialty beers under the Saranac name; probably far more than any brewer of their size who was in business long, long before the craft brewer revolution. All that from a brewery older than Yuengling; if you count the few brief years before they were purchased by the Matt family and renamed West End Brewing Company, then F.X. Matt, or just Matt Brewing. Though one could argue the brewery produced what would be called “craft beer” now occasionally throughout their history long before that trend hit the American market… their current craft beer adventure really began for the brewery back in the 80s when F.X. was challenged by a German brewer; while driving the autobahn, to make beers as good as brewers in Germany did. F.X. took the challenge seriously: hence Saranac.

Here are this year’s six winter beers, four of them are brand new.

My wife and I; both BJCP judges, briefly assessed all six. Please: this is not meant as a score sheet or close to it; just general observations. In the following order: from beers we found less appealing to the best: one that should win a lot of awards.

END_OF_DOCUMENT_TOKEN_TO_BE_REPLACED 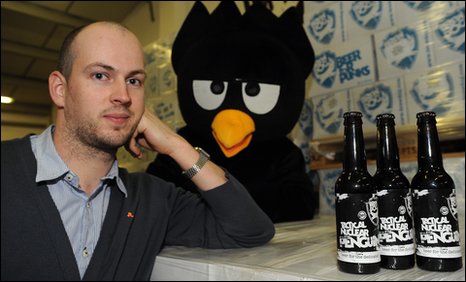 As reported by the BBC

A controversial Scottish brewery has launched what it described as the world’s strongest beer – with a 32% alcohol content.

Tactical Nuclear Penguin has been unveiled by BrewDog of Fraserburgh.

BrewDog was previously branded irresponsible for an 18.2% beer called Tokyo, which it then followed with a low alcohol beer called Nanny State.