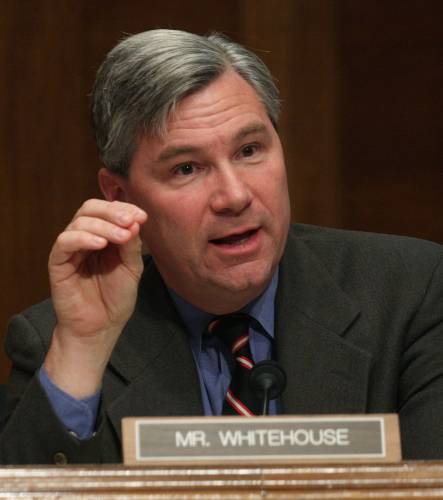 “We need to face up to the fact that there is only one leg on which climate denial stands: money. The polluters give and spend money to create false doubt. The polluters give and spend money to buy political influence. The polluters give and spend money to keep polluting. That’s it. That’s it. Not truth, not science, not economics, not safety, not policy, and certainly not religion, nor morality. Nothing supports climate denial. Nothing except money. But in Congress, in this temple, money rules; so here I stand, in one of the last places on Earth that is still a haven to climate denial.
In our arrogance, we here in Congress think that we can somehow ignore or trump Earth’s natural laws, laws of chemistry, laws of physics, laws of science, with our own political lawmaking, with our own political influence. But we’re fools to think that. The laws of chemistry and the laws of physics neither know, nor care, what we say or do here. So we need to wake up. We need to walk not in the counsel of the wicked, nor sit in the seat of scoffers, but with due humility awaken to our duty and get to work. Because here on Earth, God’s work must truly be our own.”