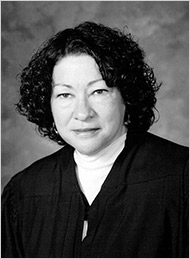 “Sotomayor seems, in many ways, tailor-made for President Obama as a Supreme Court nominee. She’s a highly educated, vastly experienced, liberal-leaning Latina with a compelling personal story, a pragmatic view of the law and a keen sense of how her decisions affect people’s lives.”

“On the Circuit Court, she has been involved in few controversial issues like abortion. Some of her most notable decisions came in child custody and complex business cases. Her most high-profile case involved New Havens decision to toss out tests used to evaluate candidates for promotion in the fire department because there were no minority candidates at the top of the list.

She was part of a panel that rejected the challenge brought by white firefighters who scored high but were denied promotion. Frank Ricci, the lead plaintiff, argued that it was unfair he was denied promotion after he had studied intensively for the exam and even paid for special coaching to overcome his dyslexia.”

“Sotomayor spent five years as a prosecutor with the Manhattan District Attorney before going into private practice as a commercial litigator. During that time she also served on the board of the Puerto Rican Legal Defense and Education Fund, the New York City Campaign Finance Board, and State of New York Mortgage Agency, where she helped provide mortgage insurance coverage to low-income housing and AIDS hospices.”

“She left for the U.S. District Court in 1992. At the time, Sotomayor told the New York Times that she was inspired to become a judge by an episode of ‘Perry Mason.'”

“‘I thought, what a wonderful occupation to have,’ Ms. Sotomayor said. ‘And I made the quantum leap: If that was the prosecutor’s job, then the guy who made the decision to dismiss the case was the judge. That was what I was going to be.'”

“Sotomayor has been considered as a potential Supreme Court Justice by both Republican and Democratic presidents.”

CNN.com on her record…

Was opposed by majority of GOP senators

Was unopposed in 1991 confirmation process

Association of Judges of Hispanic Heritage

Wrote the 2008 opinion supporting the City of New Haven’s decision to throw out the results of a firefighter promotion exam because almost no minorities qualified for promotions. The Supreme Court heard the case in April 2009 and a final opinion is pending.

Sided with environmentalists in a 2007 case that would have allowed the EPA to consider the cost-effectiveness of protecting fish and aquatic life in rivers and lakes located near power plants. Was overturned by the Supreme Court.

Supported the right to sue national investment firms in state court, rather than in federal court. Was overturned unanimously by the Supreme Court.

Ruled that a federal law allowing lawsuits against individual federal government officers and agents for constitutional rights violations also extends to private corporations working on behalf of the federal government. Was overturned by the Supreme Court.

Sotomayor was first appointed to the federal bench in 1991 by a Republican President, George Bush, but it was a Democrat, Sen. Patrick Moynihan, who recommended her to Bush.

In a 2005 panel discussion at Duke University, Sotomayor told students that the federal Court of Appeals is where “policy is made.” She and other panelists had been asked by a student to describe the differences between clerking in the District Court versus in the Circuit Court of Appeals. Sotomayor said that traditionally, those interested in academia, policy, and public interest law tend to seek circuit court clerkships. She said, “All of the legal defense funds out there, they’re looking for people with Court of Appeals experience. Because it is — Court of Appeals is where policy is made. And I know, and I know, that this is on tape, and I should never say that. Because we don’t ‘make law,’ I know. [audience laughter] Okay, I know. I know. I’m not promoting it, and I’m not advocating it. I’m, you know. [audience laughter] Having said that, the Court of Appeals is where, before the Supreme Court makes the final decision, the law is percolating. Its interpretation, its application.”

At a 2001 U.C. Berkeley symposium marking the 40th anniversary of the first Latino named to the federal district court, Sotomayor said that the gender and ethnicity of judges does and should affect their judicial decision-making. From her speech:

“I wonder whether by ignoring our differences as women or men of color we do a disservice both to the law and society….

“I further accept that our experiences as women and people of color affect our decisions. The aspiration to impartiality is just that – it’s an aspiration because it denies the fact that we are by our experiences making different choices than others….

“Our gender and national origins may and will make a difference in our judging. Justice O’Connor has often been cited as saying that a wise old man and wise old woman will reach the same conclusion in deciding cases. I am also not so sure that I agree with the statement. First, as Professor [Martha] Minnow has noted, there can never be a universal definition of wise. Second, I would hope that a wise Latina woman with the richness of her experience would more often than not reach a better conclusion than a white male who hasn’t lived that life.” [U.C. Berkeley School of Law, 10/26/2001]

Cases Reviewed by the Supreme Court

Affirmative Action (New Haven firefighter case): Sotomayor was part of a three-judge panel that ruled in February 2008 to uphold a lower court decision supporting the City of New Haven’s decision to throw out the results of an exam to determine promotions within the city’s fire department. Only one Hispanic and no African-American firefighters qualified for promotion based on the exam; the City subsequently decided not to certify the results and issued no promotions. In June 2008, Sotomayor was part of a 7-6 majority to deny a rehearing of the case by the full court. The Supreme Court agreed to review the case and heard oral arguments in April 2009. Ricci v. DeStefano 530 F.3d 87 (2008)

Environment (Protection of fish at power plants): Sotomayor, writing for a three-judge panel, ruled that the Environmental Protection Agency may not engage in a cost-benefit analysis in implementing a rule that the “best technology available” must be used to limit the environmental impact of power plants on nearby aquatic life. The case involved power plants that draw water from lakes and rivers for cooling purposes, killing various fish and aquatic organisms in the process. Sotomayor ruled that the “best technology” regulation did not allow the EPA to weigh the cost of implementing the technology against the overall environmental benefit when issuing its rules. The Supreme Court reversed Sotomayor’s ruling in a 6-3 decision, saying that Sotomayor’s interpretation of the “best technology” rule was too narrow. Justices Stevens, Souter, and Ginsburg dissented, siding with Sotomayor’s position. Riverkeeper, Inc. vs. EPA, 475 F.3d 83 (2007)

Taxes (Deductability of trust fees): In 2006, Sotomayor upheld a lower tax court ruling that certain types of fees paid by a trust are only partly tax deductable. The Supreme Court upheld Sotomayor’s decision but unanimously rejected the reasoning she adopted, saying that her approach “flies in the face of the statutory language.” Knight vs. Commissioner, 467 F.3d 149 (2006)

Finance (Rights of investors to sue firms in state court): In a 2005 ruling, Sotomayor overturned a lower court decision and allowed investors to bring certain types of fraud lawsuits against investment firms in state court rather than in federal court. The lower court had agreed with the defendant Merrill Lynch’s argument that the suits were invalid because the Securities Litigation Uniform Standards Act of 1998 required that such suits be brought only in federal court. The Supreme Court unanimously overturned Sotomayor’s ruling in an 8-0 decision, saying that the federal interest in overseeing securities market cases prevails, and that doing otherwise could give rise to “wasteful, duplicative litigation.” Dabit vs. Merrill Lynch, 395 F.3d 25 (2005)

Health Insurance (Reimbursement of insurance benefits): In 2005, Sotomayor ruled against a health insurance company that sued the estate of a deceased federal employee who received $157,000 in insurance benefits as the result of an injury. The wife of the federal employee had won $3.2 million in a separate lawsuit from those whom she claimed caused her husband’s injuries. The health insurance company sued for reimbursement of the benefits paid to the federal employee, saying that a provision in the federal insurance plan requires paid benefits to be reimbursed when the beneficiary is compensated for an injury by a third party. The Supreme Court upheld Sotomayor’s ruling in a 5-4 opinion. Justices Breyer, Kennedy, Souter, and Alito dissented. Empire Healthchoice Assurance, Inc. vs. McVeigh, 396 F.3d 136 (2005)

Civil Rights (Right to sue federal government and its agents): Sotomayor, writing for the court in 2000, supported the right of an individual to sue a private corporation working on behalf of the federal government for alleged violations of that individual’s constitutional rights. Reversing a lower court decision, Sotomayor found that an existing law, known as “Bivens,” which allows suits against individuals working for the federal government for constitutional rights violations, could be applied to the case of a former prisoner seeking to sue the private company operating the federal halfway house facility in which he resided. The Supreme Court reversed Sotomayor’s ruling in a 5-4 decision, saying that the Bivens law could not be expanded to cover private entities working on behalf of the federal government. Justices Stevens, Souter, Ginsburg, and Breyer dissented, siding with Sotomayor’s original ruling. Malesko v. Correctional Services Corp., 299 F.3d 374 (2000)

Intellectual Property (Distribution of freelance material): As a district court judge in 1997, Sotomayor heard a case brought by a group of freelance journalists who asserted that various news organizations, including the New York Times, violated copyright laws by reproducing the freelancers’ work on electronic databases and archives such as “Lexis/Nexis” without first obtaining their permission. Sotomayor ruled against the freelancers and said that publishers were within their rights as outlined by the 1976 Copyright Act. The appellate court reversed Sotomayor’s decision, siding with the freelancers, and the Supreme Court upheld the appellate decision (therefore rejecting Sotomayor’s original ruling). Justices Stevens and Breyer dissented, taking Sotomayor’s position. Tasini vs. New York Times, et al, 972 F. Supp. 804 (1997)

Abortion (Mexico City policy): Sotomayor ruled against an abortion rights group in its challenge to the so-called “Mexico City Policy,” which states that nations that receive U.S. funds may neither perform nor promote abortions. The abortion rights advocates alleged that the policy violated their First Amendment, due process, and equal protection rights. Sotomayor upheld a lower court ruling dismissing the case, saying that the group’s First Amendment rights had not been violated and that it had not been denied due process. On the equal protection claim, Sotomayor wrote, “The Supreme Court has made clear that the government is free to favor the anti-abortion position over the pro-choice position, and can do so with public funds.” Sotomayor did not address the underlying abortion issue. Center for Reproductive Law and Policy vs. Bush, 304 F.3d 183 (2002)

Major League Baseball Strike: As a district court judge, Sotomayor issued an injunction against team owners for alleged violations of the National Labor Relations Act during collective bargaining negotiations with the MLB players association. The owners had sought to end the system of free agency and salary arbitration and imposed a lock-out against players as negotiations began to break down. The ruling ended the longest baseball strike in history. National Labor Relations Board vs. Major League Baseball, 880 F. Supp. 246 (1995) “