Posted on June 1, 2009 by Professor Good Ales Leave a comment

Reviewed by Millie and Ken Carman

We both found a bit of corn in the aroma; not inappropriate to the style; and not that much “lager” to the taste, yeast-wise… which we prefer. Probably best listed as a Premium American or Classic… though a bit of a step up from either style. The low carbonation was a bit out of style, but please note that these samples were all bought at a store north of Salem, Ohio that I know for a fact has a low turn over of product. I felt this would be a good summer time beer that I would put up against Sam Adams any day, or any other lager.

Millie noted some caramelization up front. To me it was even more substantial. Very pleasant. Hop level light. I hardly noticed any hops. The only fault I noted was the low carbonization, not per style, but this could be due to aging in the store. 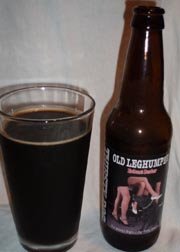 I thought this Robust Porter was about as close as one could get to a Sierra Nevada clone without being one, yet as it warmed it seemed to take on some Anchor Porter characteristics… a bit more roast and more body. Very light roasty nose in the bottle that got stronger after poured. Millie found the aroma to be toffee-like with caramel to the nose; even a bit chocolately. I didn’t get that in the nose, but I sure got it to the taste, We both felt it was very well balanced. I thought I sensed just a little citrusy nose to the hops.

I found the body a bit thin, and the hops a bit light, as far as my preferences go when it comes to this style, though not off in any sense. Millie thought it more medium to medium-heavy feel. To me I think that may have been more the roasty grain than actual body. We both sensed a slight alcoholic warmth.

It had really nice dark ruby highlights and tasted very clean: as did all these beers.

I felt this was a beverage you might want to sip cool then take occasional sips as you let it warm to sense the changes.

Millie and I both found citrus hops to the nose and to the taste. As it warmed I found the hops turned a bit astringent, but please remember… these samples may be a bit old. Millie thought it was too fruity for the style and I agree; adding that it was more a America Pale than an amber; especially color-wise. Very clear and clean looking.

I commented that it reminded me of a more quaffable version of Nevada’s Torpedo, or maybe even the Pale. I think the slight astringency may have led to the Torpedo comment. Probably age driven. Not offensive, just a bit inappropriate.

Despite the hopping the body was more than substantial enough to support the bitter/citrus edge. Actually… the best part of the beverage.

This was very impressive. I saw stats on this somewhere at 9.5. If so, even more impressive. The nose in the bottle was malty and when poured it grabbed a hold of the nose and inserted itself in a very substantial and pleasant way. People who sniff white stuff? Let them have it. I could sniff a nice Imperial Stout like this all day and be very, very happy.

I got the hops to the taste, but all I got was bitter. Considering all that’s going on here, that’s a compliment.

Millie found raisins, chocolate and coffee notes in both the aroma and to the taste. I tend to shy away from such descriptives… feeling them unfair to beers that actually have coffee and raisins in them. But I’m not sure you could get much more of a coffee sense than this than actually using really good coffee in the recipe. Very balanced. Well done!

Jet black. Dense looking with a nice, long lasting head. Nice legs in glass and despite high alcohol the head was big, brownish and lasted quite a while.

As overwhelmingly positive as this review was I can tell you the new unfiltered Siberian is much better. If it doesn’t win a boatload of awards someone needs to pull the plug on that craft, forget tossing out lifesavers unless it’s just the candy… and go find better judges. Or maybe just have the current ones get taste bud transplants.