Posted on February 20, 2010 by Professor Good Ales Leave a comment

“For the first-time visitor to Vietnam, the variety of local and regional beers can be surprising. It seems each city has a beer named after it (Bia Can Tho, Bia Thai Binh, Bia Saigon, Bia Hanoi, Bia Hue, and so on), and the best of the bunch depends on whom you ask and where youre asking. But in recent decades, Vietnamese beer culture has morphed, adopting traditional European styles as well as embracing a uniquely ephemeral home-grown brew called bia hoi. (See article after this post- Prof. GA)The latter is so popular that to many of the roughly four million people who visit Vietnam each year, drinking bia hoi on the streets of Hanoi is as emblematic of a trip to Southeast Asia as ordering pad Thai in Bangkok.”

“Ho Chi Minh City is home to a handful of European-style microbreweries, most of which are centrally located in District 1 and some of which claim to brew their beer according to the Bavarian purity law known as the Reinheitsgebot. This trend took off in 2001 when Hoa Vien, which had previously been importing Pilsner Urquell, built a Euro-style brewery inside the restaurant with the help of experts from the Czech Republic. Other breweries followed, trying to tap into a domestic beer culture that stretches back at least to the 1890s (thats when the Habeco brewery, now state run, was founded by French colonialists), was revitalized during the Vietnam War in the 1960s, and currently produces more than 2 billion liters of beer a year.” 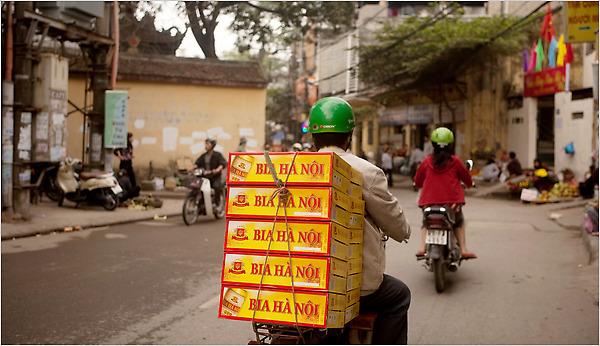 Link to rest of article