Yesterday I began rereading “From the Orange Mailbox” by A Carman Clark, a compilation of columns written for the Camden Herald by a wonderfully adventurous Maine woman. It is put together as a month by month journal so whenever I pick it up I start at the current month. 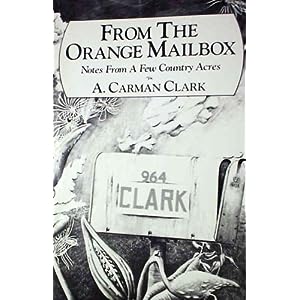 July begins with an essay on the value of weeds. Weeds are tougher and better fitted to the local environment than vegetable crops and so not easily discouraged. Healthy weeds are high in protein and deep rooted weeds serve as a pump to bring minerals from deep in the soil to the surface where shallower rooted plants can use them. “Collected composted and spaded into the soil, weeds feed my garden”, says Clark. Weeds left as a cover crop off season can protect the soil from erosion by wind and water.

This morning for some reason I see a metaphor for people in these weeds. Locals, though sometimes not as pretty as your garden variety transplant, often have a depth of knowledge of their hometown that goes back for generations. Once the tourists go home, these locals see that the place is protected from the ravages of the off season storms, and like a field of Queen Anne’s Lace, Black Eyed Susans and Chicory, have an abundant beauty.

Much of what we call weeds are actually edible and sometimes therapeutic. Burdock is not just an annoying source of pricklers that stick to your clothes and itch, the inspiration for velcro, the whole plant from root to leaf is edible. Chicory is not just a pretty blue wild flower but also a source of coffee substitute that is said to soothe and calm a person under stress as Chicory has no caffeine.

I wonder now at the numbers of plants and their uses found around the home where , I grew up. In addition to grapes, currants, black walnuts and apples, there were also fiddle head ferns an antioxidant and a good source of Omega 3’s. In CNY there is a flower my friend calls an outhouse flower because it frequently grew around the outhouses. I swear it’s a Jerusalem Artichoke. They are a good source of potassium and iron and can be eaten raw or steamed.

I wonder how our lives would be different if we ate more of these plants that are better suited to our particular geography, instead of trying to grow and consume a universal diet of hybridized and genetically altered plants, transported around the world and processed to death, becoming more a product of the petroleum industry than the soil. Perhaps we would be better suited to our geography too.

Carman Clark, born on 17 April 1917 in Old Forge, N.Y., lived on a poultry farm in Union, Maine, from 1949 until her death on 28 Nov. 2005. She was a regular columnist and the gardening editor for the Camden Herald; she wrote the paper’s From the Orange Mailbox column for over 20 years, compiling selections from the column for a book titled From the Orange Mailbox: Notes from a Few Country Acres (1985). She published a mystery novel in 2001, The Maine Mulch Murder, in which a woman discovers the body of a young man who had come to rural Granton, Maine, to locate his birth parents. A sequel, The Corpse In The Compost, was planned. Clark’s first career was as a school teacher specializing in language arts at Thomaston Junior High School. She was the mother of mystery novelist Kate Flora, who interviewed Clark in the Spring 2001 issue of Mystery Readers Journal (not online), and librarian John Clark. She died in Nov. of 2005. http://www.waterborolibrary.org/MWI_detail.php?authID=397