The Rapture and the Corn Field

Ana made the mistake of watching a documentary on US based Rapture Theology. I think the film makers tried to do a fair job of representing the major players in the most politically influential segments of the movement, particularly from Texas. The people, church goers, interviewed were intelligent, normal looking and sounding, family folks. The major preachers – maybe not so much.

I know many fundamentalist, evangelicals who believe in the Rapture and end time theology. Many even who believe end times are near. They believe that God will come, that the events portrayed in Revelation will happen. They also look forward to a second coming with trepidation because they know their faith has some shaky spots. Mostly they do not want to know that other men, women and children will have to go through the tribulation.

These evangelicals proselytize their faith because they want a happy ending for as many people as possible. They believe that even though God will eventually, at some time only He knows, call in the debt of humanity, that God also wants to save as many as possible.

This documentary wasn’t about those people.

This was about men (entirely men) who are working on an international scale to force into place the criteria for the end times to happen. Arrogant, smug, connivers, willing to twist the fate of nations in order to fulfill their interpretation of scripture. Not only do they believe they know it all, they seem to think that America is the chosen new Holy Land. And for what?

What is a thousand years in the grand scheme of things? What does it say that a person is willing to throw the rest of the world under the bus forever, for 1000 years of primacy. And what then?

What does this have to do with agriculture?

As my readers know, I am concerned with environmental issues. I want the world and its creatures to be protected from the ill effects of our industrial nature.  I even believe that people of faith have a responsibility to the creator and each other and the rest of God’s creation to be good stewards of the world around them.

To these Rapturists – the book of Revelation foretells the destruction of the Earth’s environment by God. Then God will supernaturally make the world pristine again.

So, to them, what the heck does it matter what man does?

The most important task they have is to see the world destroyed so that God can fix it.

These men are very, politically motivated and are ensconced in our system. They are pouring money into Israel, in order to force its destruction. They are driving much of foreign policy.

May the God/dess have mercy on us. 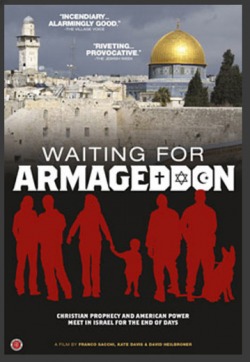