Posted on October 14, 2011 by Ana Grarian Leave a comment 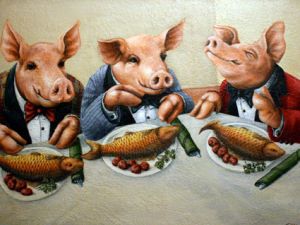 The Occupy Wall Street protests grew out of anger at the outsized power of banks. But as they’ve expanded nationwide, the uprisings have evolved into a kind of running challenge to the way power is concentrated in all aspects of our economy—concentrated into the hands of people with an interest in maintaining the status quo.

No doubt, the financial sector is a stunning example. This MoJo chart shows how the 10 largest banks came to hold 54 percent of US financial assets, up from 20 percent in 1990. As big banks gobbled smaller banks and became megabanks, they managed to extract more and more wealth out of the economy. Even after the epochal meltdown and bailout, the financial sector now claims fully a third of US corporate profits. They’ve invested a chunk of that windfall in what is probably Washington’s most formidable lobbying machine—which is precisely how they managed to slither away unscathed despite the economic carnage they caused.

But other economic sectors are similarly concentrated, and have a comparable grip on public policy. Consider the industry I cover. Our national food policy is both in desperate need of reform and utterly trapped under the heel of industry influence. So, as Occupy Wall Street evolves, food policy should be on the plate. Here are four reasons why:

1. The food industry is a big fat monopoly.
Agribusiness is concentrated to a point that would make a Wall Street master of the universe blush. Vast globe-spanning corporations, many of them US-based, dominate the industry.

Let’s start with “inputs,” the stuff farmers buy before they plant their crops. As of 2007, six companies owned 75 percent of the global pesticide market, and four companies sold half of the globe’s seeds, ETC Group reckons. Here’s the kicker: Three of them—Monsanto, Syngenta, and Dupont—are on both lists. The agrichemical makers have transitioned into seed barons, genetically engineering their major seed lines to resist their own herbicides.
Three companies process more than 70 percent of beef in the US; four slaughter and pack more than 58 percent of our pork and chicken.

Monsanto is an interesting case. In addition to being the planet’s largest seed vendor, with 23 percent of the market, it licenses its patented genetically modified traits to other companies. Think of the physical seed as the hardware and traits as the software. In the trait market, Monsanto holds a near monopoly: By 2007, according to ETC Group, 87 percent of the acreage dedicated to genetically engineered crops contained crops bearing Monsanto traits.

Okay, so farmers rely on a small handful of firms for their inputs. But it turns out the same thing holds true when they harvest and sell their crops. Just four companies—Cargill, Archer Daniels Midland, Bunge, and Louis Dreyfus—control up to 90 percent of the global trade in grain. In the United States, three of those firms process 70 percent of the soybeans and 40 percent of the wheat milled into flour. The bulk of corn and soy grown by US farmers ends up feeding animals in vast factories, and here, too, the consolidation is dramatic: Three companies now process more than 70 percent of all beef, and just four firms slaughter and pack upwards of 58 percent of all pork and chicken.
By 2002, just four companies produced 75 percent of cereal and snacks, 60 percent of cookies, and half of all ice cream.

Finally, let’s look at the supermarkets. Walmart opened its first grocery-selling “superstore” in 1988. Today, it controls 2,750 superstores and more than a quarter of the US grocery market. As a result, the combined market share of the four largest grocery players has doubled, from less than 20 percent in 1992 to nearly 40 percent today.

And, despite acres of shelves groaning with thousands of products, only a few large companies stock supermarkets. By 2002, the USDA reported, four companies churned out 75 percent of breakfast cereal, 75 percent of snacks, 60 percent of cookies, and 50 percent of ice cream.

2. The food industry screws farmers, its own employees, and the environment.
In antitrust theory, when four players control more than 40 percent of a market, they’re said to wield “market power”—that is, they can manipulate the prices they charge consumers and the terms on which they deal with their suppliers. So, rather than raise prices, the food industry has slashed costs—at the expense of workers, farmers, and the environment.

The meat industry provides a stark example. Today, you can grab a McDonald’s McDouble burger or a McChicken sandwich for a dollar. As I noted above, just a few companies process the great bulk of meat consumed in the United States. How can they do that profitably, when McDonald’s is practically giving burgers away? Simple: screw the workers.
Some 80 percent of the antibiotics sold in the United States go to livestock facilities, the FDA reports.

Employers put workers at predictable risk of serious physical injury even though the means to avoid such injury are known and feasible. They frustrate workers’ efforts to obtain compensation for workplace injuries when they occur. They crush workers’ self-organizing efforts and rights of association. They exploit the perceived vulnerability of a predominantly immigrant labor force in many of their work sites. These are not occasional lapses by employers paying insufficient attention to modern human resources management policies. These are systematic human rights violations embedded in meat and poultry industry employment. [Emphasis added.]

Farmers, too, got the shaft. As a few big hog processors like Smithfield gobbled market share and began raising millions of their own pigs, pork prices tanked and tens of thousands of farms went belly up, despite an increase in the total number of hogs being slaughtered. In 1992, America had 240,000 hog farms, the USDA reports, but only 60,000 of them remained by 2007. Similar trends have hit the poultry industry.

Meanwhile, shunting livestock production into huge factory-style facilities has led to a massive concentration of toxic animal waste. Using data collected by the EPA, the Environmental Integrity Project recently showed that animal factories routinely emit levels of particulate matter, ammonia, and hydrogen sulfide that are well above acceptable health limits. A good deal of that manure ends up in groundwater, too, fouling drinking water supplies and fish habitat.

Finally, to keep their animals alive and growing fast under dire conditions, the meat industry laces feed rations with antibiotics. The FDA recently revealed that 80 percent of the antibiotics sold in the United States go to livestock facilities. Nearly every US public health and farm oversight agency has acknowledged that the practice contributes heavily to the rise of antibiotic-resistant human pathogens—vicious superbugs like MRSA, a resistant form of staphylococcus that kills now more Americans than AIDS does.

3. Wall Street’s greed leaves millions to starve—literally.
One obvious reason that Occupy Wall Street should focus on food is that Wall Street itself focuses on food.

As I reported last month, two recent UN reports directly implicate commodities speculators for driving up the price of key food staples like rice and wheat—leaving tens of millions of people around the world hungry in order to make a buck. A new study (PDF) reaching the same conclusion has emerged from the New England Complex Systems Institute—and was reviewed by two Harvard economists and an official from the Federal Reserve Bank of Boston.

Sure, these analyses note, US and European biofuel programs have played a role in all this by (foolishly) diverting key food staples into car fuel. But Wall Street took the biofuel craze to a whole new level. Olivier de Schutter, the UN’s Special Rapporteur on the Right to Food, puts it bluntly:

The promotion of biofuels and other supply shocks were relatively minor catalysts, but they set off a giant speculative bubble in a strained and desperate global financial environment. These factors were then blown out of all proportion by large institutional investors who, faced with the drying up of other financial markets, entered commodity futures markets on a massive scale.

And here’s what the New England Complex Systems Institute team had to say:

The two sharp peaks in 2007/2008 and 2010/2011 are specifically due to investor speculation, while an underlying upward trend is due to increasing demand from ethanol conversion.

They illustrated this with the following chart.

From: “The Food Crises: A quantitative model of food prices including speculators and ethanol conversion,” New England Complex Systems Institute, 2011.