Why not Relax Friday?

The holiday season is fast approaching bringing special events to share with family, friends, church and community. First up is Thanksgiving. What do you think of when you think of Thanksgiving? A turkey with all the trimmings? Getting out the good china and polishing the silverware? Going over the river and through the woods to Grandma’s or Aunt Elaine’s or maybe to the Community Food Pantry to help out the less fortunate? 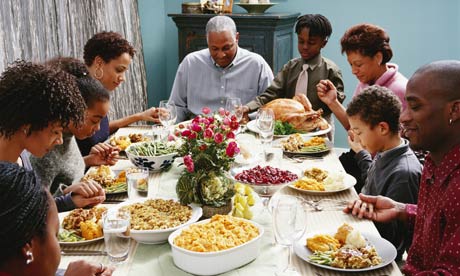 I have always loved Thanksgiving. Even getting up in the early hours to put the turkey in the oven. My kids are old enough that we share meal preparation and clean-up, as well as alternating whose house we go to.

For many years the Friday after was a wonderful cozy day on the sofa watching TV, reading, napping, planning for Christmas with the family. Leftovers could be enjoyed all day long. Even farm work was limited to barn chores so that we could have family time. We didn’t do the shopping thing, but we did pass around the sales circulars and the Sears Roebuck toy catalog doing a little dreaming.

Now it seems that every holiday is simply a reason to shop uncontrollably, and none more so than “Black Friday”. I can’t imagine a more miserable time to be in the mall. No parking, rude crowds, why? Originally stores were open normal hours. Then they went to extended hours, and we got people being trampled and killed by people manic to get into the stores.

In 2006, a man in Roanoke, Virginia shopping at Best Buy was recorded on video assaulting another shopper.[16] Unruly Wal-Mart shoppers at a store outside Columbus, Ohio, quickly flooded in the doors at opening, pinning several employees against stacks of merchandise.[17] Nine shoppers in a California mall were injured, including an elderly woman who had to be taken to the hospital, when the crowd rushed to grab gift certificates that had been released from the ceiling.[18]

In 2008 a crowd of approximately 2,000 shoppers in Valley Stream, New York, waited outside for the 5:00 a.m. opening of the local Wal-Mart. As opening time approached the crowd grew anxious and when the doors were opened the crowd pushed forward, breaking the door down, and trampling a 34 year old employee to death. The shoppers did not appear concerned with the victim’s fate, expressing refusal to halt their stampede when other employees attempted to intervene and help the injured employee, complaining that they had been waiting in the cold and were not willing to wait any longer. Shoppers had begun assembling as early as 9:00 the evening before. Even when police arrived and attempted to render aid to the injured man, shoppers continued to pour in, shoving and pushing the officers as they made their way into the store. Several other people incurred minor injuries, including a pregnant woman who had to be taken to the hospital.[19][20][21] The incident may be the first case of a death occurring during Black Friday sales; according to the National Retail Federation, “We are not aware of any other circumstances where a retail employee has died working on the day after Thanksgiving.”[19]
During Black Friday 2010, a Madison, Wisconsin woman was arrested outside of a Toys ‘R’ Us store after cutting in line, and threatening to shoot other shoppers who tried to object.[22] A Toys for Tots volunteer in Georgia was stabbed by a shoplifter.[23] An Indianapolis woman was arrested after causing a disturbance by arguing with other Wal-Mart shoppers. She had been asked to leave the store, but refused.[24] A man was arrested at a Florida Wal-Mart when other shoppers waiting in line for the store to open noticed that he was carrying a handgun and reported the matter to police. He was discovered to also be carrying two knives and a pepper spray grenade.[25] A man in Buffalo, New York, was trampled when doors opened at a Target store and unruly shoppers rushed in, in an episode reminiscent of the deadly 2008 Wal-Mart stampede.[26]

This year many stores will open at midnight. Our mall has instituted a MANDATORY midnight opening for all vendors. EXCUSE ME!?!

Can anybody NOT see that this is an attack by capitalism

against the worker, if not the family?

In my university community a significant part of the population will be out of town, leaving even fewer employees to cover holiday shifts. That means fewer folks able to travel to see family or friends. Will there be a lot of Thanksgiving dinners at 10 am cause Mom needs to get some sleep before work?
I see this too as an attack on women. I remember when the guys decided we’d load trucks on Thanksgiving cause “there’s nothing to do before dinner”. “Hey – who do you think cooks dinner?” Didn’t matter, the few women who worked got at 3 to start the turkey, woke their kids up at 4am to go to the babysitters, and went to work, then home to finish putting dinner on the table, while their coworkers drank beer, burped and watched the game.
Most retail workers are female. Most housework, childcare, and meal planning and preparation are done by women. So when that sales clerk, or waitress is grumpy or rude or makes a mistake. Just stop and think about it. She got up to have your coffee ready at midnight. She’s working extra shifts all month so that (a) she can have enough to provide a holiday for her family. (b) She can keep her job cause extra hours are probably mandatory.
Better yet – stop and think about it now. If your local stores are opening at midnight – DON’T GO! Call, write and email to tell them you won’t be shopping then. Start a local campaign to ask them to open at normal hours. Join an Occupy Black Friday event.
Plan a Warm and Cozy Friday with your kids.
I’ll be working Black Friday. Though at our store it will not be a Black Friday Event. It will be business as usual at the usual hours. I can go out of town to share Thanksgiving with extended family because I can get a night’s sleep before going to work.

Just when did it become our duty to shop? Robotic rats after an elusive cheese?