It’s polluted – $ell it to the farmers

When did we start farming brownfields? 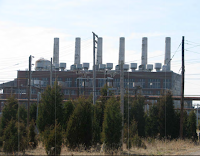 As a kid growing up in rural Southern Indiana, I knew the 10,000+ acre, Indiana Army Ammunition Plant was blighted by long-term pollution. My step-dad had told me. It wasn’t a secret back then.

That’s why I was surprised to hear in it’s last meeting of 2011, the River Ridge Development Authority which has owned and controlled the former Plant since 1998, announced they’re offering more than 360 acres of land to farmers.

“It’ll be a good revenue boost.”

First, Louisvillians, River Ridge is in Indiana but it’s a few miles up the road (Closer than Crestwood). So this is relevant to you so keep reading! See this old map: 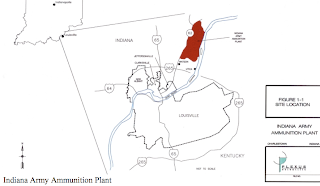 Oh where do I start? More than 1,000 years ago, indigenousMississippians inhabited this very site…then greedy white men came to screw everything up…Wait, that’s too far. Sorry.

Going back to World War II. the Charlestown, Indiana site was first put in production in 1941 and operated initially by DuPont, a company with a seriously screwed up environmental record. The plant produced smokeless powder for World War II, and came to be known locally as the “Powder Plant.” It formerly closed in 1992, after 51 years of industrial production. For a comprehensive history of the Plant (including photographs), visit: Abandoned: Indiana Ammunitions Depot.

In 1973, the EPA issued a report on why the Ohio River was polluted, and in that report the Indiana Army Ammunition Plant was considered a factor because “acid wastes from the manufacture of nitric and sulfuric acids are discharged to the Jenny Lind Flume.” (McAlpine Pool Report Ky)

The Jenny Lind Flume referenced is also known as the Jenny Lind Run, and is in near a habitat area for theGray Bat, an endangered species.

In the late 1950’s, a dam was built and Jenny Lind Pond (pictured right) was created on the Run to retain industrial waste water before discharge directly into the Ohio River. In March of 1997, the dam failed with an Ohio River flood, and as of 2001 the plan was to rebuild the dam prevent contaminated sediment from migrating into the Ohio.

According to the Indiana Department of Environmental Management, a 1990 Preliminary Assessment was done in preparation for transferring a small section of the Plant from the Army to the state of Indiana for use as a park. A part of that transfer included what was known as the “Old Landfill,” about 20 acres in size, and polluted as of 2001. (See p16)I remember when over 100’s potential names were submitted by citizens for this new park, and the most creative selection was determined to be Charlestown State Park.

But what is important here is that land was given the “green light” but only “for use as a park, preserve, or recreation facility.”(IDEM: Indiana Army Ammunition Plant – Charlestown, IN)Not for growing food for humans to eat.

In 1994, an environmental investigation of the grounds was initiated to evaluate 85 sites within the Plant by the Indiana Department of Environmental Management (IDEM). In December 1998, the IDEM issued a letter stating the agency had transferred regulatory oversight for the remedial corrective action activities to the IDEM.

Also in 2001, the Department of Defense considered pursuing claims for contamination against corporations which contaminated government properties, but the Army assessed the prospects of recovering costs at all 24 ammunition plants were “extremely low” due to legal barriers to cost recovery presented by the statute of limitations, indemnification issues, and exclusion clauses. (Cost Recovery Status)

In March of 2010, the EPA found River Ridge in violation of compliance with landfill standards and general facility standards and issued a written informal warning. I *think* this went unreported in the news. (EPA)

When River Ridge was looking for contractors to assess what it it’s going to take to demolish the two power plants on the property, the Authority issued what they called “A REQUEST FOR STATEMENTS OF QUALIFICATIONS by the RIVER RIDGE DEVELOPMENT AUTHORITY for BROWNFIELDS SITE ASSESSMENTS AND DEMOLITION PLANNING.”(Download if you have the memory: 11.1 MB)

In that document, an obvious truth slip:

“The full extent of the contaminants is unknown and this procurement represents an initial effort to assess the current condition of the properties.” 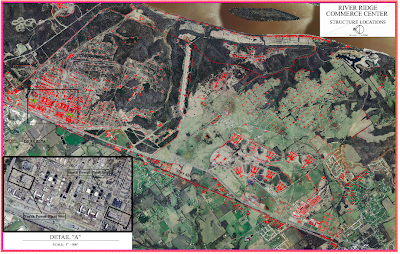 Brownfields are called brownfields for a reason. The fieldssurrounding, and sharing a watershed, with an industrial facility are potentially polluted by said facility. In the photo above, the red spots are improvements still existing from the Powder Plant days. And the green land around them, maybe not so green after all.

What is confusing, is that in 2001 there was an Installation Action Plan issued to clean up the Indiana Army Ammunition Plant by Chris Inlow, with the Corps of Engineers. That plan was packed full of information about pollution on the site and what could be done about it, but I can find no records that the plan was implemented. In fact, the plan revealed in 2001, that if it were to be implemented, it would take until 2010 to complete. This plan is a MUST-READ if your curious about pollution or conservation at the River Ridge site, so I uploaded to my google docs: The Corps Clean-up Plan for River Ridge.
Perhaps the best thing to come from this report, Inlow itemized the past environmental reports done on the Ammunition Plant site from 1980-2001: 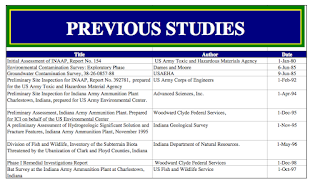 Fun Fact from the Corps Report:
Ever wonder why there was never a Restoration Advisory Board (RAB) for citizens to oversee the clean-up of the Ammunition Plant?

Now we know: ”The Installation Commander determined that there was not enough sustainable community interest to establish a RAB.”
How did the Installation Commander determine potential interest in establishing a RAB? “Advertised in the in the Louisville Courier Journal and the Charleston Leader in January February 1998…No response was received from the community or regulatory agencies… not enough interest to establish and sustain a RAB at this time.”

To my knowledge, to this day, neither the Indiana Department of Environmental Management, nor the EPA, nor the Corps of Engineers have done soil tests to clear any fields in River Ridge for agricultural use. But if I’m wrong, don’t get mad because it’s not exactly easy to find out anything about what goes on with this place.

Please let me know if I’ve made any factual errors in this post, or if you have information to add, via comment below, anonymous okay, or email: curtster3@gmail.com.