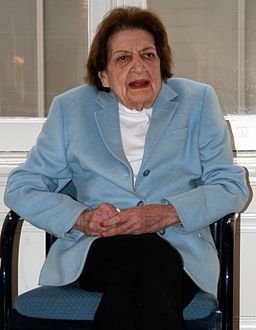 My sense of outrage is nothing new. When Hillary and Barack were going at it some of my readers were outraged when I pointed out that Hillary didn’t say many of the things they claimed she said. There is this insane tendency to take words spoken these days; add phrases never used, or add one’s own interpretation of those words, then act as if this is all unaltered, unmodified, pure fact instead of being, at best, convenient interpretation.

Enter now ex-reporter Helen Thomas. After Germanic sheisen hit the fan, because two of the countries Helen suggested those who occupy Palestinian lands go back to might be Germany and Poland. One would think the ovens there were still pumping essence of Jew into the atmosphere. Now any settlers who ever might decide to go back there I am guessing probably find it far more hospitable than America, or France, or… pick another country. Germany has changed, and I heard a rumor that Adolph Hitler may even be dead; the Nazis defeated.

But it goes without saying that Germany and Poland were horrible choices, even if Helen was put on the spot to suggest where they might go.

This I understand. I even understand that with an ax to grind; a reporter they wanted to butcher, in public, would go out of their way to rephrase what Helen said into “all Jews should go back to Germany and Poland.”

That is simply not what she said. You have to put the questions she answered in context. She was referring to the Palestinians and the occupied lands. If she had said “all of Israel,” I’d be the first to carry a torch… though I still think she has a right to her opinions and still be a reporter. Unless of course we make a rule that those who state vile things, who support mass murder, or cause unjust war, should be denied work as reporters. OK. I’m up with that. Let’s start with the reporters who regurgitated every lie pushed by BushCo pre-Iraq.

So… back to Helen… what was reported about what she said doesn’t really match the actual conversation. It’s beyond just a simple perversion of what she said. It takes a poorly phrased, stupid, clumsy, off the cuff answer to a series of questions and turns it all into something so anti-Semitic you would expect she had been possessed by the ghost of Goebbels when she said it.

But what makes me rage, makes me furious, is that so many bought into the spin that Helen had said “all Jews.”

Now I certainly wouldn’t have answered “Germany.” I certainly would have said “wherever they wish to go,” or even back to the original borders of Israel… probably the best choice. And I would have made clear that I was referring to the lands Israel took then occupied with settlers, not Israel itself. And while I do believe the apology Helen gave was certainly appropriate, I am bothered by this form of “gotcha” “Journalism:” if one dare call it “journalism” at all. What might baffle me is those who believe asking Sarah Palin what magazines is “gotcha” journalism but fail to see this for what it is: gotcha “journalism” driven by the intent to lie about the context of Helen’s answers so as to ruin the career of probably the only true journalist left in America.

Notice I typed “might baffle.” The exception here is I think those who claim to believe this know it’s all donkey dung of smelliest kind. They’re driven by what’s politically convenient. Not truth. Not morals or ethics. Not honesty. These are the most dangerous citizens in America today… and the most un-American.

These days the pundits who lead such traitors ruin lives for fun and political profit, Despite her serious misstep, Helen was a necessary foil for all the BS and lies spewing from the putrid pieholes of talk show hosts, presidents and their spokesfolks. And you know, in their studios and offices, they have been popping champagne corks over the fact that the one reporter who really thought her job was to keep them honest is a reporter no more. Of course they will blame it all on Helen, but that’s so simply not the truth of the matter.

The fault lies with the reporters and pundits willing to smear those who are inconvenient with lies, and those of us who don’t listen carefully enough to what was actually said to know the difference.

Inspection is a column that has been written by Ken Carman for over 30 years. Inspection is dedicated to looking at odd angles, under all the rocks and into the unseen cracks and crevasses that constitute the issues and philosophical constructs of our day: places few think, or even dare, to venture.
©Copyright 2010
Ken Carman and Cartenual Productions
All Rights Reserved