Soupy Sales is dead at 83, one of my icons I base my routines on.

It was rare when my middle brother and I agreed as kids. When Bullwinkle offered two alternate titles for the next episode we would choose different ones. I’m surprised we even agreed about Bullwinkle or Crusader Rabbit. Since he ran the TV early Saturdays, I finally saw Howdy Doody at the end of the last show.

(Hence I’m the children’s entertainer with puppets and he’s not.)

But we agreed about Soupy. Soupy Sales offered one of the best versions of slapstick, deadpan looks at the camera and fiction narratives about, amongst many things, his pretty much never seen dog “Fang” during the 60s. I think at best we may have seen a huge paw coming from off camera. “Fang” was specifically funny for us because we had had a dog named Lucky who probably bit everyone in the family we eventually had to put down, adding humor to a very unfunny, tense, then sad situation. He even managed to make pies in the face funny sometimes, amazing even back then when it was already a ho hum cliche’.

I’ll never forget that we were watching when he got kicked off the air for a brief while. He looked into the camera and, with what should have been a trademarked smirk, he said; paraphrased…

“Do you know where your Mommy’s purse is boys and girls? Find the thing inside with green stuff sticking out, put it into a stamped envelope and send it to Soupy Sales, Channel 5…”

I turned to my brother and said, “He’s going to get in trouble for that…”

How’s this for irony…

“He was born Milton Supman on Jan. 28, 1926, in the North Carolina backwater of Franklinton. The Supmans were the only Jews in town. Sales’ father ran a dry goods store that sold sheets to the Ku Klux Klan.”

“The family name was often mispronounced as “Soupman.” To make matters worse, his parents, who had nicknamed his brothers ‘Hambone’ and ‘Chickenbone,’ dubbed him ‘Soupbone.’ Eventually, Milton became just Soupy.”

Link
Because any good comedian knows where the line is between acceptable and not, they walk that line and may step over it occasionally. I find those who don’t usually beyond “un-funny.”

Soupy knew where that thin line was and his dance down it was a marvel to watch. Since some of his shows were live, if I remember right, his missteps and trips were even better.

So let’s be serious for a moment and remember Soupy… 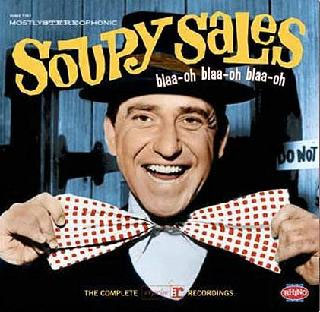 Hard isn’t it? Good. Soupy would have wanted it that way.