The Hummer is Dead. And We Buried It. 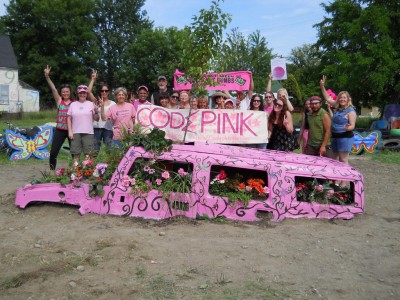 On the eve of a gathering of over 25,000 social justice activists in Detroit called the U.S. Social Forum, environmentalists and peacemakers led by the group CODEPINK converged to bury the symbol of the American hubris: the Hummer. One month after the last Hummer rolled off the production line, the activists gave the hulk of steel a proper burial.

The resting place chosen for the Hummer was the Heidelberg Project, an artistic community in downtown Detroit where dolls and plastic toys and shoes and shopping carts are transformed into street art. People come from far and wide to view the wild and wacky creations by artist Tyree Gupton. Heidelberg Street’s message to Detroit and global visitors is one of renewal and hope in a city devastated by hard times and unemployment.

The activists used the Hummer’s demise to mark the end of a Rambo-like era, culture, lifestyle, and political philosophy. A converted military tank first sold to civilians in 1992 thanks to the promotion of action hero/Governor Arnold Schwarzenegger, Hummers represented an increasing militarization of our society and the glorification of war. They were also an energy sinkhole that helped fuel wars for oil and global warming. The Hummer’s dreadful gas mileage of 8-10 miles per gallon was less than half the mileage of the Model T Ford 100 years ago! Hummers emitted over 3 times more carbon dioxide than average cars and they give off more smog-producing pollutants and dangerous particulates. But because they had been categorized as light trucks, they were exempt from meeting emission or fuel-efficiency standards. While the $50,000-$150,000 Hummer models were advertised as the coolest, fiercest car on the road and a patriotic way to “support the troops”, activists tried to label the Hummer an unpatriotic car that fueled war and warming. For years, CODEPINK women would do guerrilla theater at auto shows, climbing atop the vehicles and draping them with messages such as: “Real soldiers are dying in their Hummers so you can play soldier in yours.” They held anti-Hummer actions at auto dealers, surrounding the monstrosities with bicycles and Priuses. They handed out traffic violation tickets, signed by Mother Earth.

Campaigns like that of CODEPINK raised awareness and shamed many a consumer from driving a Hummer. The Hummer also took a blow when the resistance movements in Iraq started blowing up Humvees with primitive IEDs. The burned shells on the side of the Baghdad roads tarnished the image of the “invincible King of the Road”.

But the real blow came with the rise in oil prices. Sales plummeted when people had to cough up over $100 to fill the gas tank. The generalized economic crisis in the past two years put the nail in the coffin. And with the news that the Hummer was officially off the assembly line, CODEPINK made plans for the burial.

The H-3 Hummer that was buried in Motor City was bought from a parts yard for $500. The spanking new vehicle had been leased from a dealership but when the leasee discovered he owed more money then he had, he had the bright idea of torching the $100,000 tank and claiming it was an accident. The story didn’t go down well with the dealer or the police. The macho man is now spending time in prison for arson and fraud, while the burned-out hulk of the vehicle became the centerpiece of CODEPINK’s art installation.

With the help of a backhoe and a car carrier, the activists dug out the final resting place and slowly lowered the shell into the ground. They painted it bright pink with vines and flowers. John George, founder of Motor City Blight Busters brought four brightly painted butterflies to add to the emerging greenery. They filled the insides of the Hummer with dirt, and then festooned it with live plants, a rainbow of flowers and a pear tree bursting through the sunroof. The macho machine was suddenly transformed into a giant flower pot.

Just ahead of the buried Hummer, rising out from the ground, was a pink bicycle with an arrow pointing “To the Future.” And off to the side, a car hood became the Hummer’s memorial tombstone, lettered to read:

ODE TO THE HUMMER
Ashes to ashes, dust to dust
We bury a Hummer here to rust
And from these ashes, we recreate
A world of peace, an end to hate.

At the close of a long work day, the group held a solemn ceremony where they individually pledged to do more to help heal our planet. Then they sang, danced and rode bicycles on the Hummer’s grave.

“I always wanted to dance on the Hummer’s grave,” said CODEPINK activist Tighe Barry, who directed the project and grew up in Detroit. As he bid the Hummer a formal farewell dressed in a pink Marine uniform decorated with peace symbols, he said, “For us, burying the Hummer is letting go of the macho ways of driving and dominating our streets, our economy and our foreign policy. It’s time a new trend of green jobs and renewable energy for all. We see the demise of the Hummer as a positive sign of the clean, green, peaceful planet we’re determined to build.”

CODEPINK would love to hear your pledge for building a clean, green, peaceful planet — share them with us

Medea Benjamin is the cofounder of Global Exchange and CODEPINK: Women for Peace