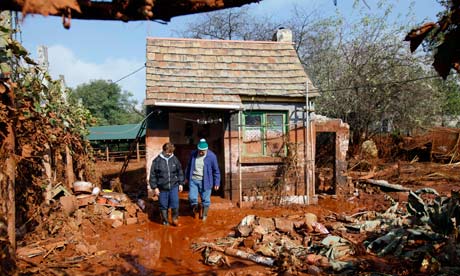 PRAGUE – Czech firefighters are doing a comprehensive check of locations where dangerous waste has been deposited, a move prompted by Hungary’s disaster with caustic sludge.
Official spokesman Radek Kislinger says the check will asses the state of pools, reservoirs and dams of toxic sludge at active and closed plants, mines and factories in the Czech republic.
Working with regional authorities, firefighters also will review evacuation plans and access routes for rescue workers and firefighters.
Kislinger said Tuesday the check should be completed next week.
He says authorities want to minimize the risk of the kind of disaster that Hungary had when a flood of caustic red sludge killed eight people after bursting from a reservoir.
Associated Press Oct. 12, 2010

When Americans read news reports about toxic accidents like the recent breaching of a toxic waste lagoon in Hungary, I think we too often dismiss the possibility of it happening here. “Those are third world countries”, we say. Or, “That could never happen here. We’ve got strict regulations”. Or maybe we don’t even believe that those kinds of cesspools exist in our country. I mean, it just seems so, primitive.

It’s all around us folks. My lovely lake is surrounded by manure pits holding millions of gallons of manure. Soon to be bigger if local legislators and factory dairies have their way. Their proposed biogas project would enlarge existing lagoons to incorporate addition of cheese plant and slaughterhouse waste to increase production of bio-methane. All of these facilities neighbor either the lake directly or streams that feed into it.

Hydrofracking for (un)natural gas makes use of holding pits to manage fracking fluids and the toxic flow back. Millions of gallons of toxic fluids are used for each well.

The Appalachians see their share of leaking and leaching fluids from the barbarian practice of Mountain Top Removal Coal mining.

Here’s one of waste oil lagoons at the Portland Bangor Waste Oil Co. (PBWOC) property is located along Burnt Mill Road in Wells, York County, Maine. The 10-acre PBWOC property is comprised of Lot Nos. 14A-1, 15, and 15A as described by the Town of Wells Tax Assessor’s Office. From the early 1950s until 1980, PBWOC operated a waste-oil recycling business on Lots Nos. 14A-1and 15A. Lot No. 15 contained a partially filled waste oil and sludge lagoon approximately six acres in size.

The lake sized tailings pond proposed for the Pebble Mine project, is basically a toxic waste dump the size of a lake; in the Bristol Bay region of SW Alaska

I’ve got news for you folks. SH*T flows down hill and downstream and downwind. We’re all connected and your not exempt.