This post has nothing in particular to do with agriculture though I was shopping in a farm supply store. I’m having some problems starting my car. I’m not sure if it’s the battery or the alternator. So, before spending beaucoup bucks on either one, I decided to buy a jump charger.

I’ve had one before.

It’s a handy device that has a small battery that can be used to jump-start your car if you do something dumb like leave the headlights on, or your battery is a little weak. I’ve used it to help other folks too. Some of them even jump-start the car through the cigarette lighter so you don’t have to hassle with the jumper cables. That’s really nice now that auto maker’s hide your battery posts in weird places.

I found one at a good price and went home to charge it. Yeah it has to be charged up when you first buy it and after you’ve used it several times. I read the instructions to see how long that would take. Up to 72 hours. OK. I’m lucky, I don’t NEED my car on a daily basis.

Hmmmm. Says here I need a heavy-duty extension cord. Why? I’m right next to the wall plug. Ohhhhh! Because the cord is not included! And the plug is INDENTED INTO THE CASE! So even if I could magically line the thing up I can’t plug it, into the wall.

It also can be charged while driving by the use of a male to male plug for the cigarette lighter. It doesn’t come with one of those either.

I don’t own a heavy-duty extension cord.

I don’t own a light duty extension cord.

Now of course this is not the fault of the store. They didn’t design or package the thing. There are no markings on the outside of the package to say I need these things.

Later on when my neighbor gets home I’m gonna have her help me push start the car. 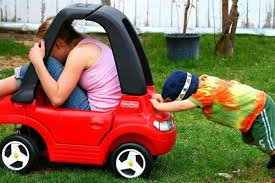 That is frustrating. Once I bought a window air conditioner and on the outside of the box it warned not to plug it into a power strip or extension cord — had to go straight into a wall outlet. The only thing is, the cord on the AC was only about 2-feet long. If an outlet happens to be right under your window, that’s fine but, otherwise, you can’t use the thing. On the advice of an electrician friend, I got a heavy-duty power strip and extension cord, and it worked without problem. I have a feeling that they screwed up at the factory and installed the wrong length cord and then decided it would cost too much to replace them all — no wonder that model was such a screaming deal special.

I have never bought one that lasted very long, or worked that well… and getting rid of them is a pain. Due to the built in battery they are considered toxic waste.

Oh, and when it comes to design, has anyone else noticed that boomboxes asll use the same chord but they design the end specific to only a few units? Sometimes you can use a knife and carve it down to fit. And everything else has a chord with something that changes the voltage on it and sometimes the tip is negative, sometimes positive and the shape varies. And the prong it plugs into within the units break a lot now making the units useless. They would still work if anyone would fix it for a price less than the unit, but no one will. 99.9% of the time I am guessing there’s no real reason to do any of this except to sell more stuff.

It’s maddening to buy something that says you can use batteries or a DC/AC adapter to power it, and then discover after you’ve opened the box that no DC/AC adapter is enclosed. Then you have to either order the DC/AC adapter from te manufacturer, try to find it at your local store, or spend a bundle on batteries. Crazy.

Hmmmm – I didn’t know about the toxic waste thing.
Power cords, adapters, etc are such a pain in the butt. The power strip I use has 6 openings but I can’t use them all because some of the plug ends are too large. Have you ever had the problem where you can’t plug 2 things into a wall outlet because one covers the other opening? Argh! And yes – it’s all to make us buy more.

Yes, have that problem all the time.

In Nashville we are given specific instructions to bring power stations to locations that specialize in toxic waste. It’s the power cell/battery.

Just faced that problem recently, Ana. Three power coverters take up a six outlet power strip for the computer, meaning I have to use extension cords if I want access to the other outlets. I also have a USB hub with four inlets, but some of the USB adapters are too large to fit and still be able to plug in on either side of the adapter, so I have to have an extension there, too. There has to be a better way.