A lot of movie moment refs here, even an ad.
I understand: what I am venting about here, if solved, might put me out of the column business that has made me so rich and famous… sarcasm noted. So I suppose the major takeaway here might be a mea culpa. When I write one of these ‘smack down’-style editions am I merely mimicking the very prose I criticize?

So how close with our rhetoric, how absent of true content will we get, to becoming an Idiocracy? How much closer to everyone trying to outdo the flame throwing talents of Supreme Beef?
To say I enjoyed Everything Trump Touches Dies by Rick Wilson: long time Republican strategist and a Never Trumper, would be like saying I enjoy Don Rickles-like politics. Don was very talented at what he did, I’ve just never was a fan

of gratuitous insult humor, except a roast or two, at best. And a good roast requires the roast-ie be in on the joke and able to roast back.
I understand I am in the minority here: not the first time. And perhaps that’s part of my point. Today’s society is moving towards being too much of an Idiocracy version of Don Rickles for my taste.
Rick Wilson might be a great person to be the object of a roast, even better as a roaster. Rick has mastered clever insult politics as well as Rickles mastered comedic insult. Comparing his words to the pathetic invective of our Insult-in Chief, Trump is the 6th grade bully held back 5X, Rick would be the great orator…if insult humor and politics could be defined as “great.” I understand. Too often I do it too. It’s hard when sometimes politics makes the worst behavior in the WWE seem almost genteel.
Yes, it’s fun, but… later. END_OF_DOCUMENT_TOKEN_TO_BE_REPLACED

Trump’s Base Is a ‘Cult’ That May Never Be Deprogrammed: Report 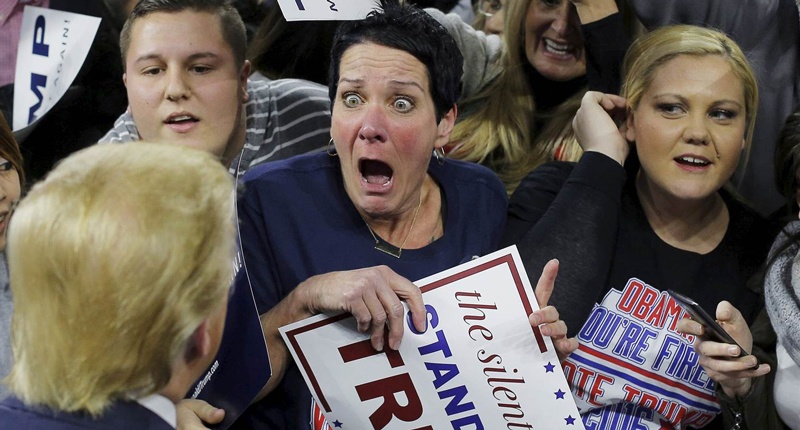 On Saturday, The Daily Beast’s Kelly Weill posted an analysis of President Donald Trump’s base, and what their recent behavior, which “experts say resembles a cult or totalitarianism,” says about the country’s political health.

“Trump has long stoked bigoted grievances among his followers, but the Greenville rally saw him act as a more overt radicalizer than ever before,” wrote Weill. “And with a portion of Trump’s fanbase now openly clamoring for the physical removal of several prominent Democrats of color, experts are questioning whether the country can repair the damage — even if Trump loses in 2020.”

It is an open question how many people who chanted “Send her back” about Rep. Ilhan Omar (D-MN) are true believers.

Why They Hate Bernie

Remember the frenzied, paranoid style of right-wing anti-Clintonism? The lies, the conspiracy theories, the deeply personal disgust? Well, it’s back — only this time it’s migrated to the Democratic Party and its unhinged attacks on Bernie Sanders.

here’s shocking news out of MSNBC: its ever-more-conservative team of analysts aren’t fans of Bernie Sanders.

“Just as a woman, probably considered a somewhat moderate Democrat, I — Bernie Sanders makes my skin crawl,” former New York prosecutor and MSNBC legal analyst Mimi Rocah told the panelists of last weekend’s Up with David Gura. “I can’t even identify for you what exactly it is, but I see him as sort of a not pro-woman candidate . . . I don’t understand young women who support him.” Dem Leaders Have Done Everything to NOT Impeach Trump

onald Trump is the most criminally corrupt and dangerous President we’ve ever had. The majority of voters despise him and voted the Democrats in last November to hold him accountable. Yet the Dem leaders have done everything they can to NOT hold him accountable and to NOT impeach him.

For the past 2 years, Dem leaders have been promising us… Mueller Time! Mueller’s coming! Mueller’s gonna take him down! I warned people not to get their hopes up— Mueller was FBI, a Republican, a team player. Old School DC. Though hIs report offered damning evidence, he was committed to playing the game, not being a hero.

Finally — Donald Trump’s lawyer was… RUDY GIULIANI! Mueller was outmaneuvered by RUDY GIULIANI?! Bill Clinton had to testify before a grand jury, under oath, on camera, for hours, and tell every nasty detail about his sex life. Yet Trump – the biggest criminal to ever step foot in the White House–and the legal genius RUDY GIULIANI outguns Mueller and prevents Trump from testifying! Mueller testified yesterday he never even issued a subpoena! Oh-and STILL NO TAX RETURNS! The question everyone keeps asking: How does Trump get away with everything? Yes—HOW?