If ex-felons cannot own firearms, why is it not considered infringement of their rights (shall NOT be infringed) under the 2nd amendment? 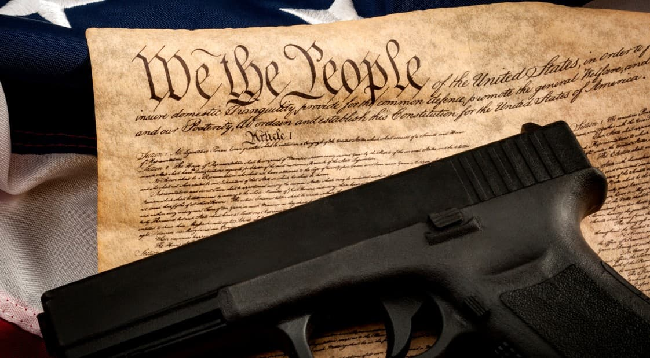 I found this in my daily Quora email this morning, and I loved the historical context so much that I thought I would share the answer here.  The answer was provided by Brandon Ross, JD who, according to his Quora bio is an attorney who has spent 10 years as an NRA instructor, 35 years owning guns.

If ex-felons cannot own firearms, why is it not considered infringement […]

Who said it’s not? You’re missing a subject who is doing the considering.

Many ex-felons do very much feel that it is an infringement of their rights.

[…] of their rights (shall NOT be infringed) under the 2nd amendment?

Since Heller, I have viewed this static position on the scope of the Second Amendment as a bit disingenuous:

I think I would like to add a couple of things minor things to this.

It is true that if you had been charged and/or convicted of a felony in this country, it was more likely than not that you were either about to be executed, or would die serving a life sentence in prison without parole.  In those days, almost any sentence in prison had the potential of being a deadly one, regardless of health and age.  Most people didn’t survive more than a year or two in a prison before succumbing to disease, and or violence.  So if you were a “felon”, you not only would not have a ‘right’ to a weapon, you also no longer had a ‘need’ for one — because you were already considered “dead” in the eyes of the law.  If

you died in prison for any reason, it was no big deal.

You are considered a ‘felon’ if you have or are in the middle of committing a felonious crime and you haven’t been caught, tried, and/or convicted yet.  If you are serving time for a felony you are considered a ‘felon’.  But the moment your sentence is satisfied and completed, then you are no longer a ‘felon’.  You would be an ‘EX-felon’, with an emphasis on the “EX”.  Former.  Previous.  Was once was…

A felon or ex-felon is no more or less disposed to kill someone than any other person on earth.  Most people who kill other people have never committed a crime prior to that.  So the reason(s) for denying a felon (and by extension and ex-felon) any rights at all has NOTHING to do with what that person might or might not do with that right, it was just that a felon would be stripped of their rights simply because they were already considered “dead” in the eyes of the law.

SHALL NOT BE INFRINGED.

The US Constitution, written by people who had almost zero concept of firearms in today’s context, felt that one of the most important rights that any individual had to survive in this world was the human right of being able to defend and provide sustenance for themselves.  It is important to note that the words “firearms” or “guns” do not appear ANYWHERE in the US Constitution.  The Second Amendment was more general:

A well regulated Militia, being necessary to the security of a free State, the right of the people to keep and bear Arms, shall not be infringed.

“Arms” could be any kind of implement that could be fashioned into and/or used as a weapon.  The colonists used a variety of different weapons including muskets, pistols, rifles, long rifles, knives, bayonets, tomahawks, axes, swords, sabres, pole arms and cannon.  Most of them weren’t equipped with actual firearms, so it was basically anything they had — they used.

When they were deciding what to include in the Constitution, the concept of “Rights” wasn’t included in the final draft that was signed and submitted to the states for approval.  Virginia refused to sign unless there was a “Bill of Rights” included with the Constitution, hence the reason for “Amendments”.

The Southern states wanted to keep their “slave patrols” to chase down runaway slaves.  George Washington, et al, were against the idea of having a ‘standing army’, so this is where the ‘well-regulated militia’ entered into the bill of rights.  Oh, and because America was still basically an unexplored “frontier” fraught with savages and other unknown dangers, it was probably a good idea for people to be allowed to arm themselves.  Oh, and it would be nice to hunt for supper…

Felons would never have to worry about such things — because they were dead men walking.  Making a law that denied dead people their “rights” would not be “infringing” on anything.