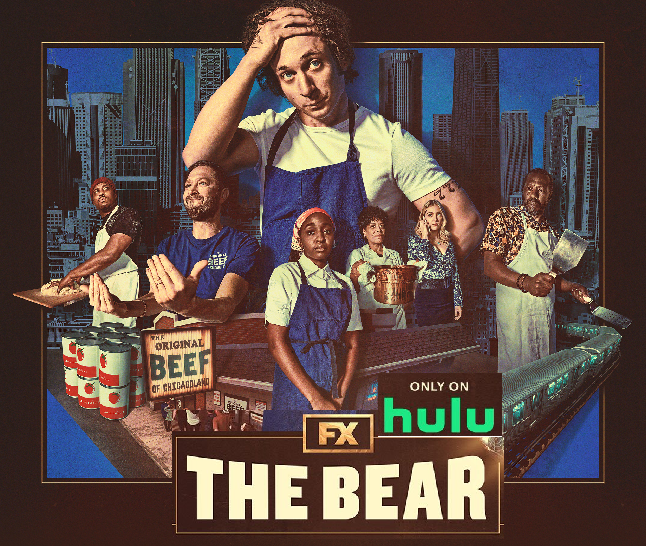 The Bear is an American drama television series created by Christopher Storer. It premiered on FX on Hulu on June 23, 2022, and stars Jeremy Allen White, Ebon Moss-Bachrach, Ayo Edebiri, Lionel Boyce, Liza Colón-Zayas, and Abby Elliott. The series received critical acclaim. On July 14, 2022, it was renewed for a second season.

From the New York Times Magazine:

The Original Beef of Chicagoland is the fitting name of the restaurant at the heart of the acclaimed FX series “The Bear,” which stars Jeremy Allen White as Carmy, a world-class chef who returns home to run his family’s sandwich shop after his older brother’s suicide. Of all American cities, Chicago is the one whose mythos is most closely associated with a particular kind of work: honest, meaty, broad-shouldered labor that forges you into something bigger, nobler. Like the city it’s set in, the restaurant in “The Bear” is an unpretentious place, humbly catering to “the working man.” But “the working man,” we soon learn — as a young, Black, female sous-chef mocks an older, white, male manager’s use of the label — is a contested term, especially in an environment where nobody does anything but work, and pretty much nobody has anything to show for it.

It’s unclear, at first, why Carmy, once named one of Food & Wine’s “Best New Chefs,” has come back to the sandwich shop, but we’re gradually made to understand that he is returning, compulsively, to a traumatic site. Food was the thread that connected him to his brother, but his brother wouldn’t let him in the kitchen, and so off to Sonoma and New York he went, to make something of himself. The Original Beef of Chicagoland is also Carmy’s original beef — the core wound that ignited his ambition, the site of his connection to his family as well as his estrangement from it.

2022 | TV-MA | 1 Season | TV Series – Comedy
Starring: Jeremy Allen White, Ebon Moss-Bachrach, Ayo Edebiri, Lionel Boyce, Liza Colón-Zayas, and AbbyElliott
Creator: Christopher Storer
DJ’s Review:
Having been an avid fan of the American (and British) version of the Showtime series, “Shameless”, I was introduced to Jeremy Allen White’s character, “Lip” and the antics of a dysfunctional Chicago family living in abject poverty and crime.  Shameless was considered a ‘comedy’, but not as a funny, “ha-ha” kind, but more of a dark comedy where the truth is what makes you laugh.
I was drawn to watching The Bear because in Carmy, Jeremy Allen White continues more in the vein of ‘Lip from Shameless and brings most of the grit and heartbreak with him into this new story.

If you haven’t yet watch Shameless (both the American version set in Chicago and the British version set in Manchester, England) you should drop everything and watch.  BOTH versions are ‘off the hook”, and it is hard to decide which is the better version.

If you liked the Chicago version, then “The Bear” will be right up your alley.

OK, I thought comments were off!

Noticed more postings by you. Bring friends! Co-edit or edit again! I have so much in the fire right now I post when I can, mostly Bartcop-like links to other sites and Inspection. Joyce hardly posts anymore.

Will have to check this out, if I get TIME. Long stories could follow, but won’t. I watch The Man Who Fell to Earth on Showtime. INCREDIBLE WRITING.

I miss Political Puzzle and Pulpit.