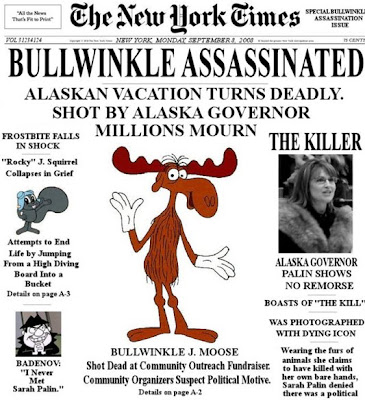 Frostbite Falls Review
Frostbite Falls, MN
Longtime resident, local and international hero, Bullwinkle J. Moose was killed while vacationing and attending a fundraiser in Alaska. He and longtime friend and fellow hero, Rocky (the flying) Squirrel were attempting to assemble a hammock between two trees when shots rang out from a passing helicopter. Rocky reports seeing the Governor laughing and waving her high powered rifle as she dropped these markers near his slain friends body.
And the text which went with it:

Governor Palin reportedly did not realize that it was Bullwinkle. “I just saw antlers and that’s fair game in my book.” “He’ll make a great trophy for my new office in Washington D.C.”

Services will be private with a public service being planned by Rocky and His Friends, Mr. Peabody and his boy Sherman. Although they are longtime Rocky and Bullwinkle nemesis’, Natashia and Boris Badenov are reportedly coming to the services. “We must come out of respect for Moose and Squirrel” said Mr. Badenov. Natashia mentions that she can see Gov. Palin’s Alaskan home from her house in Russia. But that their neighbor the Governor has never ventured across the border. “She would make excellent fearless leader.” Natashia remarked.

Bullwinkle J. Moose had traveled the world fighting bad guys. But, here in Frostbite Falls, he will always be known as our friend and community organizer.

This was passed on to me by a friend. I wasn’t able to find the original web poster but have found it on several other sites. My hat is off to the creator of this fine spoof – whoever you are.

I think I may have passed it on to a few on my pass on list once. I know I posted it once over at Mike Malloy’s site. There’s another poster there named “Moosensquirrel” whom I thought I would get a kick out of it. I don’t remember a story being attached. Nice add. Thanks.