Male Version of Statue of Liberty Proposed for Charleston Harbor 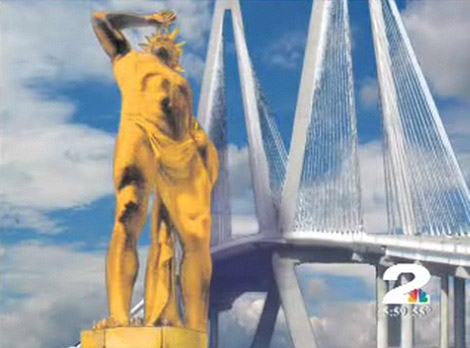 News2 in Charleston reports: “At Tuesdays monthly board meeting, Rodney Cook, of the National Monument Foundation suggested that a male version of Lady Liberty could house a museum about South Carolinas role in the Civil War. The statue would be the same size as the one in New York City, and cost about $150M. Most of that money would come from the private sector. Nick Tompkins, the spokesperson for Patriots Point told News 2 in an email, This is one of many presentations or ideas that our Board has been asked to consider for Patriots Points Master Plan. Tompkins also said, the board did not take any action on the presentation.”

A male Statue of Liberty at Patriots Point?

Seeking to inject a lofty idea into a new land development plan for Patriots Point, an Atlanta-based group today proposed a male counterpart of the Statue of Liberty to stand guard over Charleston Harbor.

Details were scant, but the head of the National Monument Foundation said the Charleston area, with its rich history, is the most appropriate place on the East Coast to “wed” Lady Liberty with an complementary statue in the South.

The over-arching theme would be patriotism and freedom, said Rodney M. Cook, founder and of the foundation.

A computer rendering showed a statue of Liberty-like proportions, complete with a sunburst crown. It would face the mouth of Charleston Harbor and Fort Sumter.

Cook said an elevator could transport visitors to an observation area. The pedestal could house a high-tech museum that would celebrate South Carolina’s pivotal role in the Revolutionary War and the state’s effort to secede.

Ideally, Cook said, an island near Patriots Point could be built to house the monument.

“We’re looking at a statue similar to the Statue of Liberty,” he said.

Patriots Point Development Authority board members and staffers said today was the first time they had heard any details of the proposal. No action was taken.

“Wow,” commented board member Harry Gregorie, who then asked the how much it would cost.

Cook said he did not have a firm number but estimated the statue would run anywhere from $100 million to $150 million, depending on the height. The bulk of the money would likely have to be raised from private sources.

Cook said the idea his to create an iconic attraction that would draw international recognition to Patriots Point. That, in turn, would make the property at Patriots Point more valuable.

The statue idea will be discussed in more detail next month at a series of workshops about how to develop the rest of the land at Patriots Point to create revenue to maintain the ships that make up aging naval maritime museum.

I visited the Statue of Liberty twice as a kid. Both times we couldn’t take the side excursion up into the torch because it was unstable. I’m almost embarrassed to ask what the “side excursion” would be here. But, I suppose, that could be made into a Coney Island/Palisades Amusement Park like “water”-ride.

That having been typed, this IMO is a real stupid idea. Plus, the SOL was a gift. In these times of tight budgets and cutting SC should also be “SOL,” in the other sense. What a waste.

I noticed part of the post was found on a gay web site. No offense to the gay community intended, but why am I not surprised? I suspect they, more than the stupidly “patriotic” in the straight community, would see the unintended humor here.

Are you sure this wasn’t proposed by National Lampoon or Mad Magazine?

I think I’m one of the few people who lived in NYC for six months and never saw the Statue of Liberty — not even from a distance.

You’re right, ken — I think this is a silly idea, and it probably is being proposed as a joke.