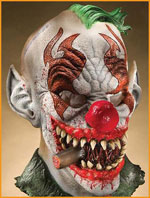 No one would believe a “street eccentric” who button-holed them with this story:

“I can press my left nipple and flames will shoot out of my ass, turning me into Rocketman. I can zip through the clouds, playing tag with angels. I can fly to tomorrow so fast that I’ll arrive while clocks are still two hours into yesterday.”

It’s a pretty safe bet everybody would quickly back off a good distance, wary of what the crazy person might really do.

Tell those same right-wingers, however, that Barack Obama is either a foreign-born alien, a secret Muslim in league with al Qaeda, a Marxist, or that he didn’t really bag Osama bin Laden, and they’d hurriedly form a lock-step marching line headed straight for downright political lunacy that would make Speedy Firefart seem like a paragon of rationality in comparison.

I can’t come up with a satisfactory explanation.

Maybe Donald Trump and Orly Taitz were lovers in a prior lifetime, and begat offspring, who then married their first cousins, giving birth to successive generations of cousin humpers, who finally emerged in the present era as genetically warped weirdos who couldn’t have a part-ways sane thought if their lives depended on it.

Before the Tea Party and Birthers surfaced, the goofiest character I’d ever known was a particular stoner from decades ago who was always entertainingly high.

One time he was riding shotgun beside me as we were cruising in my old Ford and came upon a hitchhiker so scary looking that we sped up rather than slowed down, for safety’s sake.

Aided by a marijuana buzz, my gonzo pal said, “Man, if I were driving along and saw myself hitchhiking, I wouldn’t stop to pick me up either.”

On another occasion, he rolled a fat doobie out of especially potent weed, smoked it, then proceeded to dance for about half an hour while holding his finger-splayed hand in front of his face.

He thought he was watching the Four Tops perform in concert.

“What about your thumb, man? Your thumb makes five.”

“What thumb? Five what?”

With contemporary Republicans you can get equivalent distortion, day in and day out, without any drugs involved.

I realize it’s also a psychological issue related to bigotry, whereby race haters too craven to openly own up to their white supremacism concoct an array of wild charges against the allegedly unqualified, incompetent, and evil black man running “their” country.

Behind the curtains of this freak show, however, is a dangerous seriousness that’s no laughing matter.

Reactionary elitists owing allegiance to private, capitalist profit are fully prepared to completely sacrifice the American masses — their welfare and common good — just so they, a tiny minority, can luxuriate at levels to which they’ve grown obscenely accustomed.

They’ll try to do it through the implementation of full-blown fascism, grim foreshadows of which we’re already seeing in places like Michigan, where appointed “emergency financial managers” are empowered to completely dismantle democracy.

Meanwhile, the rest of humanity looks upon the USA with growing disbelief, as we drift toward neo-Nazism, against a bizarre backdrop of ridiculous clowns and an off-key circus calliope playing our violated national anthem.

Which forces us to ask a deeply troubling question:

Is what’s being built a giant insane asylum — or a concentration camp?
_______

Dennis Rahkonen, from Superior, Wisconsin, has been writing progressive commentary with a Heartland perspective for various outlets since the Sixties.