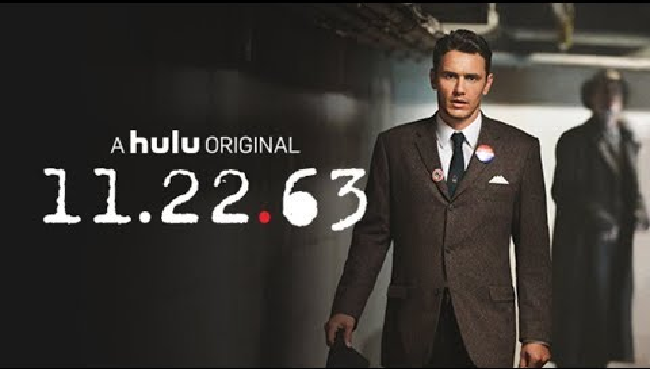 11.22.63 is an American science fiction thriller miniseries based on the 2011 novel 11/22/63 by Stephen King, and consisting of eight episodes, in which a time traveler attempts to stop the assassination of John F. Kennedy.

Jake Epping (James Franco), a recently divorced English teacher from Lisbon, Maine, is presented with the chance to travel back in time to 1960 by his long-time friend Al Templeton (Chris Cooper). He is persuaded into going in an attempt to prevent the assassination of United States President John F. Kennedy on November 22, 1963; however, he becomes attached to the life he makes in the past, which could be the mission’s undoing. He must find a way to secretly gather information about people and events leading up to the assassination while also creating and maintaining a new life to avoid suspicion.

There is a portal in the kitchen of a diner in Lisbon Maine that will take you back to October 21, 1960.  Every time you go through the portal, you arrive at that exact place and time, and every time you go back, you reset everything back to the way it was originally.  So if you change something in the past, and it screws up everything in the future, all you have to do is go back and ‘reset’ everything.  Regardless of the amount of time spent back in time, when you arrive back, only two minutes have passed in the current time.  But you have aged according to the amount of time you were gone.

The plan is to go live back in the past for three years, prevent the assassination of JFK and then come back to enjoy the wonderful life we could have had if JFK had lived.

2016 | TV-14 | Limited Series | Sci-Fi TV
Starring: James Franco, Sarah Gadon, Cherry Jones, Lucy Fry
Creators: Stephen King, J. J. Abrams
DJ’s Review:
Time travel is the draw for me.  The idea that you could go back into time and *change* one tiny, insignificant event that could throw everything out of whack.
In the story, the plan is for Jake to go back into time, determine whether Lee Harvey Oswald was acting alone, and if he was, then to take out Oswald before he can kill the president.  The idea is that the world had suffered greatly as a result of the assassination of JFK and if that could have been prevented, then the world would be a whole lot better today.

But what happens if the assassination never did take place?  What kind of a world would it REALLY be like today?