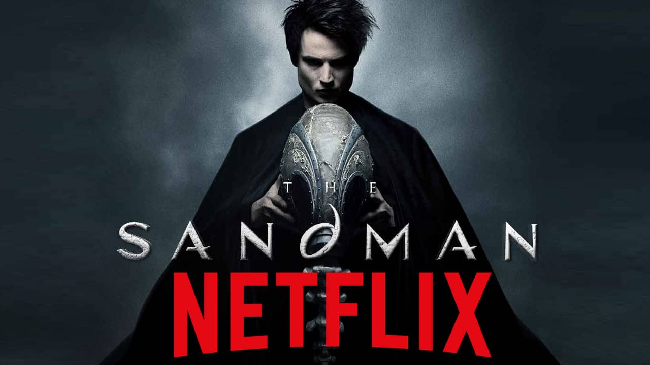 The Sandman is an American fantasy drama television series based on the 1989–1996 comic book written by Neil Gaiman and published by DC Comics.  Like the comic, The Sandman tells the story of Dream, the titular Sandman.

In 1916, Dream, the king of dreams and one of the seven Endless, is captured in an occult ritual. After being held captive for 106 years, Dream escapes and sets out to restore order to his kingdom of the Dreaming.

Efforts to adapt The Sandman to film began in 1991 and floundered in development hell for many years. In 2013,  David S. Goyer pitched a film adaptation of the series to Warner Bros. Goyer and Gaiman were set to produce alongside Joseph Gordon-Levitt, who was planned to star and possibly direct. However, Gordon-Levitt exited over creative differences in 2016. Due to the prolonged development of the film, Warner Bros. shifted its focus to television. Netflix signed a deal to produce the series in June 2019, and filming lasted from October 2020 to August 2021.

Season 1 dropped on Netflix on August 5, 2022 to good reviews.  Netflix has yet to announce a renewal for a season 2, but given the fact that season 1 dealt with only the first 12 volumes of the 74-volume series of comics, and that Warner Brothers Television is handling the production and filming, it’s a save bet that season two will show up sometime next year.

2022 | TV-MA | 1 Season | TV Dramas
Starring:  Tom Sturridge, Boyd Holbrook, Patton Oswalt
DJ’s Review:
I’ve been hearing about the production of first the movie and then possibly a television series for a LONG time.  There was a tiny point in time when it was thought it might be filmed in North Vancouver, British Columbia, because there was NO chance it would ever be filmed here in the US.  A lot of false starts and hopes all ending up going nowhere.  At the time, making it into a movie franchise made sense but would have been super-expensive making it a gamble for making a box-office motion picture.  Netflix wasn’t a thing, and getting a cable network interested in a high-production value television series in the 1990s through the twenty-oughts was an uphill battle at best.
The story has been waiting for a LONG time.  The audience has been here, it was just waiting for the venue to come along that could make it all happen.  Netflix has become the place for super-long movies presented in the format of a ‘series’, that is capable of telling a long story over an average of 20 – 30 hours and keep audiences interested over a period of years.
This is a good series to watch.  It was well-done, and the production values are top-shelf.  Tom Sturridge as Dream, of the Endless was a good pick, probably better than Joseph Gordon-Levitt, who was the original pick by Warner Brothers back in 2013.