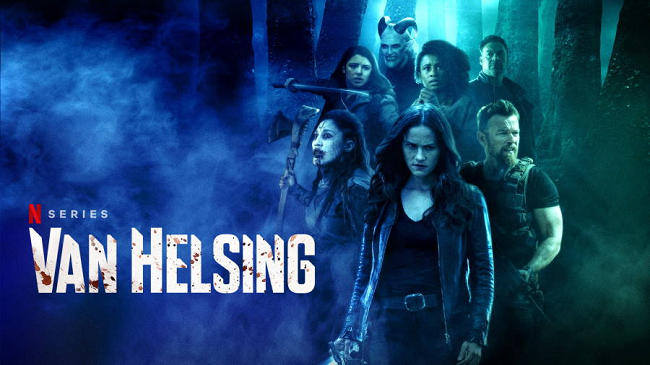 Van Helsing is set in a post-apocalyptic near future. Vanessa Van Helsing, a descendant of Abraham Van Helsing, awakens from a coma after her supposed death to find herself in a post-apocalyptic world, three years after an eruption of the Yellowstone Caldera had blanketed the world in ash, blocking out sunlight and allowing vampires to overrun humanity. She is humanity’s last hope, as her unique blood composition gives her the ability to turn vampires back into humans. With this secret weapon, Vanessa becomes a prime target for the vampires. She is protected by a Marine ordered to keep her safe, and the doctor who saved her, so she can lead a resistance against the vampires that plague the world’s survivors.

In the second season, Vanessa journeys east towards the safe haven of Denver, Colorado and discovers her long-lost sister Scarlett, who has been trained to kill vampires since birth. In the third season, Vanessa and Scarlett hunt the Elders, the original vampires, in order to defeat them for good. Following Vanessa’s apparent death in the fourth season, the series switches focus to her long-lost biological daughters Violet and Jack as they face a new “daywalker” breed of vampires as well as the “Dark One” and ruler of the vampire species, Countess Olivia von Dracula and her brides, a former countess of Transylvania and de-facto President of the United States.

Starring: Kelly Overton, Jonathan Scarfe, Christopher Heyerdahl, Vincent Gale, Rukiya Bernard
Creators: Neil LaBute
DJ’s Review:
In addition to time travel shows, I also enjoy a good apocalyptic, end-of-civilization shows.  The Walking Dead franchise, and other “when things go bad” shows where most of society has been killed off leaving a roaming bunch of killer zombies or other mindless ex-humans.
It’s hard not to think about what YOU would do, or how YOU would handle living in a post-apocalyptic world after everything has gone tits-up.  It is also natural for you to compare current events to how we could possibly end up living in such a world.
I’m just starting season two of this show.  So far, it’s a good one.