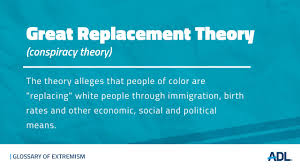 *Title chosen by the editors.

The Nazi’s were obsessed with the purity of the bloodline ?. They wanted to weed out the disabled, mentally ill, infirm and sick. They wanted to kill them. They wanted to make sure the Aryan bloodlinewas kept pure and free from contamination by “UNTERMENSCHEN”. Inferior people.

The premise was that Jews and other contaminants, which included “mud people” black and brown, Roma, Gays, Slavs, Poles, Russians were to be either enslaved or eliminated in service to the Reich.

The Thousand Year Reich of the Fuhrer’s delusions would establish a pure, Aryan, Teutonic, Agrarian warrior society of the Master Race that would rule the Earth like Zeus with dominion over all things, including all of the lesser races.

This insanity came from an 1855 essay called the “Inequality of the Races.”

It is the deadliest essay in history. Within 90 years, the toxic origin of Scientific Race Theory had spawned the Nuremberg Laws and killed 100 million people.

This is what now spews forth every night on Fox News in the White Power Hours of Tucker Carlson and Laura Ingraham. This is what is embraced by JDVance.
When they talk about the “REGIME” and destroying it, they are talking about it precisely like their cousins of the 1920s and ’30s did when they railed against corrupt Democracy that made the Master Race equal with mud people. It is the same thing. “Legacy Americans” is a gentler (term), in an equally dangerous moment, for “Master Race.”
…Evil is real.