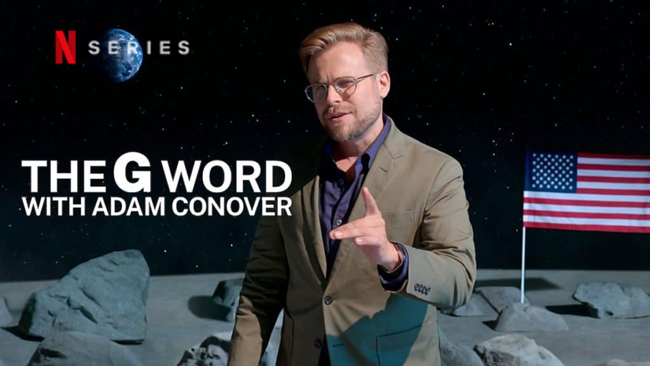 The G Word with Adam Conover is a hybrid comedy-documentary series that pulls back the curtain on the surprising ways the US government impacts our everyday lives, from the mundane to the life changing. With his signature blend of irreverence and insight, Conover explores the government’s triumphs, failures, and what we might be able to do to change it. The G Word with Adam Conover is produced by Higher Ground alongside Adam Conover, Jon Cohen, and Jon Wolf of Fair Point.

Former President Obama makes  a couple of cameo appearances in this series — the opening episode and the closing episode of the season.  Love it or hate it, the government plays a huge role in our lives. Adam Conover explores its triumphs, failures and how we might be able to change it.

I am a sucker for everything Adam Conover does.  Adam Ruins Everything was one of my favorite shows until he was forced to quit production because of COVID.  Now he’s back with one of Obama’s projects — showing what the role of government actually is and how without it we would NEVER be close to what we are today.

Comics have a tendency to be more real about things than any politician or talking head.  You laugh at a joke or a bit because there is an undeniable, if not uncomfortable  TRUTH involving a tragedy, misdeed, or corruption.  Something is, or has gone wrong, and comedy allows us to laugh at it.  If you are laughing at something, you know there is a factual truth involved.  Comedy and tragedy go hand-in-hand.

There are six 30-minute episodes that deal with Food,  Weather, Money, Future, Disease, and Change.  I watched the entire season in one sitting.

Ordinarily, I would have just filed this under my Streaming Video Picks page here, but I thought I would fly it out front for a couple of days first.