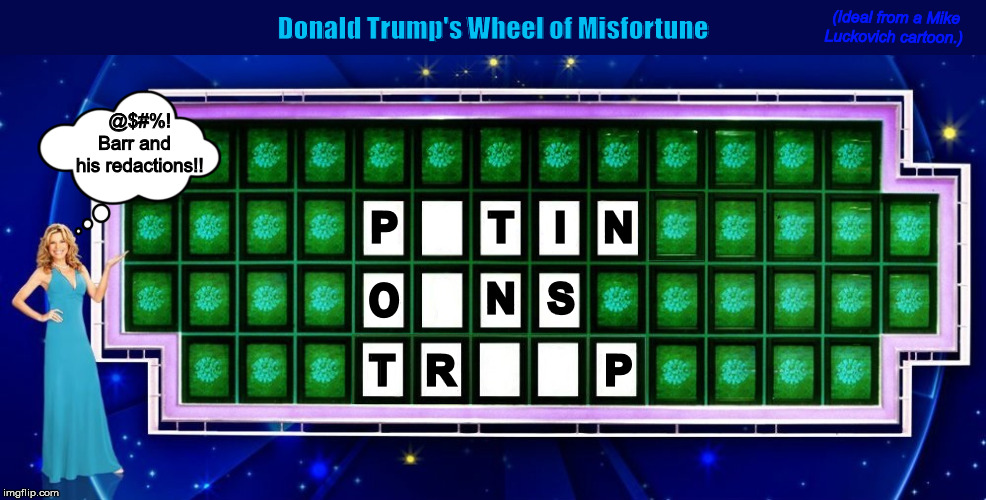 Casino?
Bankrupt.
Steaks?
Bankrupt.
Charity? So dishonest a player; whether in his casino or on this national Groundhog’s Day game show, no one should have to spin again. Of course, sooner than we think, his newest Wheel of Misfortune will be up and ready to play. The last one left in the hands

of whomever he wants blamed. Somewhat fictitious Antifa. Those who lives he wants NOT to matter, like anyone but him during 1/6. Joe Biden. Liz Cheney. Anyone testifying to the committee and telling the truth. The people he wants to lose are pretty much anyone but the orange terroristic terrorist.
Narcissism on perpetual steroids. If this was a cemetery this would be perpetual “He don’t care.”
2024 will soon be here. Ready to play again? Look, America, that wheel only offers two options. Pat and Vanna’s eyes widen in horror as they present the options…

Option #1: some variation on Garland coming out with indictments, Trump at the top of the list. Trump gets convicted. Trumpers rally. By November enough states have screwed the voting pooch they can simply appoint who they want, after declaring there was cheating (or blah, blah, some other blah) and we get a Republican Congress. Enough people purged. Enough people falsely charged with voting while not having a politically correct opinion, or being of the wrong race, or absolutely voting twice because there’s a John A. Jackson in FL and a John P. in Texas…
Let’s face it, Republicans have been working on many ways to assure they win for a long time, under false claims.
All this sets up a second term: if not for Trump (Hey, who packed the courts?), for DeSantis, for… basically the same can of anti-democratic, with a small “d,” government that ends what little freedom as a nation we have with a dictatorship. The audience goes, “Oh…..”
Ready to spin the wheel again? Pat and Vanna have run out of the studio but let’s spin the wheel for…

Option #2: Garland does what he has been doing. Call it running out the clock, call it meticulous. By the time he does anything Congress turns Republican. (Hey, sure, could be a Dem wave. I’m skeptical, but I have been skeptical before and proven wrong.) By the time the presidential election comes Garland is beside the point. Trump gets the nomination, or runs on a third party: The MAGA Party. Let’s say Liz Cheney runs on a third instead. I doubt she’d ever get the nomination with the MAGA death grip on the party. If this was Titanic Rose would drown too.
In a semi-historical repeat of the second Lincoln term, the vote is split and Biden, or Harris, or… becomes president again, or for the first time. Obama can’t run. Jimmy? Really, at his age? Clinton? Maybe Hillary, though that is a minefield.
Of course not one of these will happen exactly as I claimed. Surprises always happen. But what DO you want? You want Trumpism back?  Option #1 is the most likely spin into that goal.
The worst fate for Trump wouldn’t be prison. The Don would most likely start a gang. I wouldn’t be surprised if he ran from prison and won. The worst fate would be to run and lose horribly, bringing down his party with him.
Ready to spin? We are alone. Pat and Vanna are outtahere.
Choose.