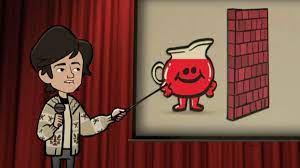 ”I speak to address years of injustice, false accusations and slander. Mr. Kool-Aid may occasionally be guilty of bad taste, but he is no mass murderer!”
The lawyer spoke as he pointed at an empty chair where Mr. Flavor-Aid was supposed to sit, Mr. Flavor-Aid being absent for many years now. “Get a Clue! It was Mr. Flavor-Aid with cyanide in the big pot!”

The prosecutor immediately started preparing his rebuttal; how the defense attorney had a hard on for blaming Flavor, and since they had to be related because they had the same last name, convicting one was the same as the other. Guilt by accusation recently made the law of the land. He even had chosen the start of his rebuttal, calling out the defense attorney for having some imaginary hard on, or JONES(town), about making sure Kool saw a prison cell with no due process. He had had more than required by the law, which with the change was NONE.
And so our discussions have gone for years since Atwater, Rove and Newt decided framing was the way to handle politics. Less “discussion” than insult-based BS. Which proves what? NOTHING. But it does get people angry. It does make the less sane among us, and the partisanly extreme, pickup guns and commit mass murder.
Basically guilt by accusation, trial by ill-informed, cultish one sided partisan juries, moronic public lynch mob behavior.
”Biden has dementia! It’s so obvious!” (No, it’s not.)
”Trump is mentally ill! It’s so obvious.” (No, it’s not.)
If it was “obvious” then maybe so many wouldn’t disagree? The obvious, the oblivious, so often pick easy answers. Easy answers are easy because so often theyare wrong.
I claim no purity here.
We argue over speculation, eventually high board partisanship diving down into the sharks that wait below: insults. No one is convincing anyone, so why do we do it? We are so convinced we are right, they are to blame, murdering villains must be justified. The world will be a better place after, won’t it?
No, it won’t. Indeed, if not immediately, eventually it will be worse.
The problem is not how we deal with issues, as in we don’t deal with them at all. We divert, we accuse, we what-about-ism them to death. We refuse to see nuance. Easy answers give us an excuse to jihad, and I mean the worst definition of “jihad.”
During the “war against an idea” (terrorism) how many number 2’s have been kacked? What happens? They are replaced with a new, even worse, #2.
Wow, that’s going the wrong direction.
Hitler, Mussolini, the Emperor all went away. Fascism, communism, dictatorship on the run! Not so much now. Seems they have us on the run. Like some LSD-driven delusion we smack them down and they just pop back up again, eventually bigger, more clever, more able to spread around the globe. Deception is their weapon.
We make enemies of friends, warriors of relatives and strangers out of those we claim to love. We think their silence means they agree, or are silenced by our brilliance. What they’re more likely to be thinking is, “Why should I bother? What an idiot.”
Then we go both back to pointing fingers.
Mr. Kool-Aid is not to blame.
Mr. Flavor-Aid is not to blame.
Neither mixed the drink. Neither forced it down children’s throats.
Perhaps we need to stop feeding the machine? Stop speculating about Biden’s dementia, Trump’s stupidity? What has any of that done for us so far, except self gratification?
If we don’t stop that we don’t just go blind, we get dead, along with those we take out with us.
We are like that annoying aunt or uncle who tells everyone what they should think, what they should believe, and what everyone thinks of you. Ironic: their accusations often apply more to themselves. Why it’s as if they are trying to distract you from their own failings!
Couldn’t be, could it?
Where we are headed neither Flavor, nor Kool, are allowed a trial. Or you. Or me.
I know, public lynching’s are so passé. We’ve moved on to about mass lynching. Partisans thinking that shooting up a theater, a store, a church will achieve something. Yes, we arrest them, imprison them, kill them. Yet, like those #2’s, they are replaced and the situation gets worse.
Treating the symptom, offering no cure, assures the disease mutates into a country, a world, where lynching is considered the only form of acceptable justice.

Inspection is a column that has been written by Ken Carman for 50 years next week. First published in fall of 1972. Inspection is dedicated to looking at odd angles, under all the rocks, and into the unseen cracks and crevasses, that constitute the issues and philosophical constructs of our day: places few think, or even dare, to venture.
©Copyright 2022
Ken Carman and Cartenual Productions
all rights reserved