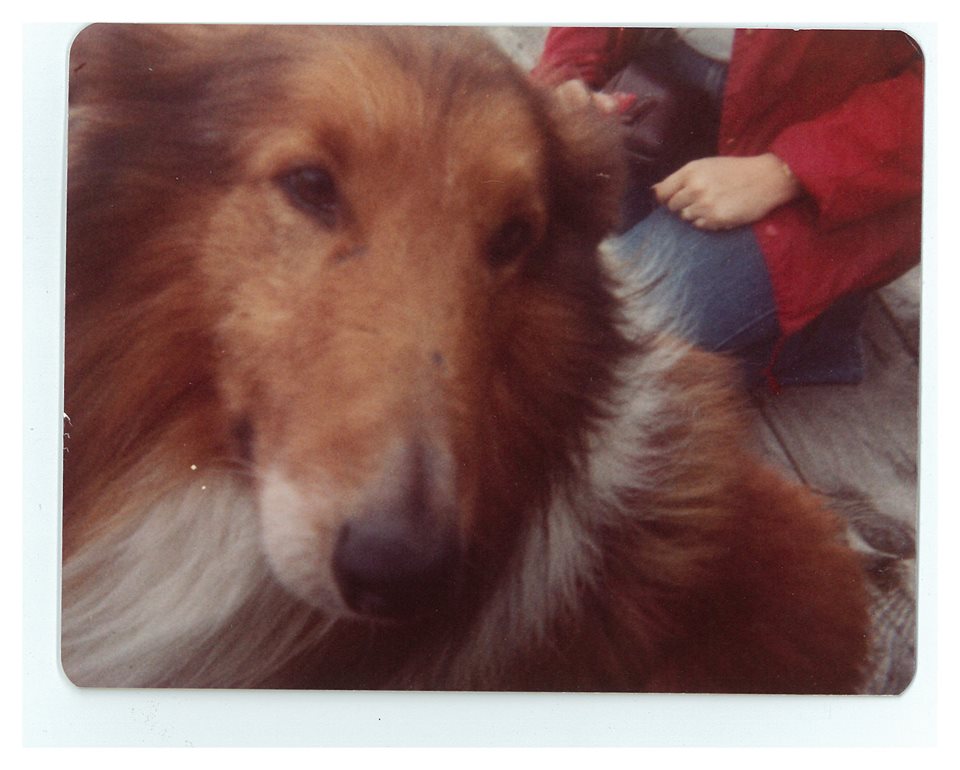 Laddie, towards the end of his life.

A brief break is long overdue from political and social issues. IMO, these are some of the best columns I write. ENJOY!

Then God created humanity’s perfect companion.
Growing up my family always had dogs. When I was in college, after my first fiancé’ ended our relationship, I was lonely. Being a collie fanatic since 3rd grade I went to the pet store and bought a collie puppy with my hard earned cemetery earnings. A desperate, somewhat thoughtless act, I admit.

Yes, I worked in a cemetery, in fact two times. During hard times jobs are scarce. Almost no one thinks of cemeteries.
I found, over the years, practicing my shows at cemeteries a perfect place. They are perfect “listeners.” Like collies. The great dogs listen, not judge. They don’t call us idiots for being a Liberal, or being a Conservative, or MAGA, or BLM. They love us. Even Hitler was loved by his dogs: German Shepherds which MAY say something about certain members of the breed. Like much maligned pitbulls most are sweet, I’m sure.
It’s rare that a dog is born mean, though having worked with the young for years I have no doubt a small handful are just like a handful of humans are. Jeffery Dahmer for one, or the murderer of my favorite teacher: Jim Weber. David Bullock claimed he did it for fun, and he murdered many before he was done. But, for the most part there are no “bad dogs.” My guess would be far fewer than humans born bad. A small percentage: their minds just wired wrong. Not genetics, not how they’re raised. Their minds just wired wrong.
Like 99% of kids, I’m sure 99.5% of dogs are saint-like, angelic. After being passed on from me to my father, I tend to wonder if, Lana, my first collie was herding her next master when she nipped him. It’s a collie thing, and people identify it as “biting.” If she actually bit I still wouldn’t blame her: by the time most dogs defend themselves the person bit may (I repeat MAY) deserve the bite. Or instability confuses them.
It’s a shame how many dogs are put down when the world might be better off if the worst masters suffered that fate instead. And I wouldn’t be surprised if that abuse includes their children, their spouse, as well as their pets.
Dogs measure the owner. Tell the divine if we are decent human beings. I often wonder if they are angels on 4 feet sent to see if we are worthy of an afterlife with them. I hope I have qualified. I admit there have been times, like Cobalt the blue Merle collie, who refused to jump up on the porch because he had a bad back and what I said wasn’t kind. I didn’t know about his bad back… yet. Years later I developed one myself.
Karma?
I named my first pup, “Lana,” a name I found on a gravestone. She was wonderful, but I came home and found the next door neighbor’s kid had tried to burn the house down. Lana was fine, but the fire department condemned the house I was living in. I had opened all the windows to assure the summer heat wouldn’t be too much, which probably saved her
Sad beyond belief I gave Lana to my father. Not a single college landlord would accept a dog, and I had to stay in college approved housing.
Lana found a wonderful home, and I am thankful for all my Facebook friends who have shared pictures with me. Recently I met Kathy who knew Lana and assured me Lana had had a long and wonderful life. I think she understood the pain I felt when I realized I had no other choice but to give her to my father.
I didn’t get another collie until Millie and I had bought where we lived for 42 years: 17 miles outside of downtown Nashville. Perfect place for a dog: 30 acres, our own little valley (unfortunately tick infested) of privacy. 20-30 miles of woods behind us until the state of Tennessee decided to place a four lane back there. Far too close for comfort. Luckily not one escaped and ran up to that highway.
Laddie is buried at the place we called Emerald Dawn. We moved recently. An occasional muse: I wonder if his ghost wonders where we went? He had had a long, mostly happy life; at least 10 years with our landlady, Martha Adcock, and 6 years with us. Ralph, her ex, wasn’t much of a dog person, so it was best we became his parents. He was so smart maybe we were his kids? We were pretty young at the time, Laddie old and wise.
Like Lana, you were well loved Lad. Karen Adcock; my former landlady’s daughter, stopped by Martha Adcock’s salon years ago. She cried when I told her Lad had just passed. I know how she felt. We wept many tears for our beloved collies when they passed on.
If we can’t greet them when we die, IMO, there IS no heaven worth going to.
We have had six collies over the years.
We didn’t deserve them. Maybe none of us deserve our dogs.
I can’t imagine a more perfect companion.

I felt it important to show a few of my better angels. The first, well, I didn’t have jpeg of Cobalt. This is a Blue Merle. The rest Lana, Frankincense and Payson. That’s an Albert Payson Terhune book Payson, our current sable, is in bed with. I caught him reading. (I’m kidding, but he is smart: second only to Laddie.) Lana in her later years. Thanks for the pics! Terhune and Frankincense were both tricolor. I had no Terhune jpeg.