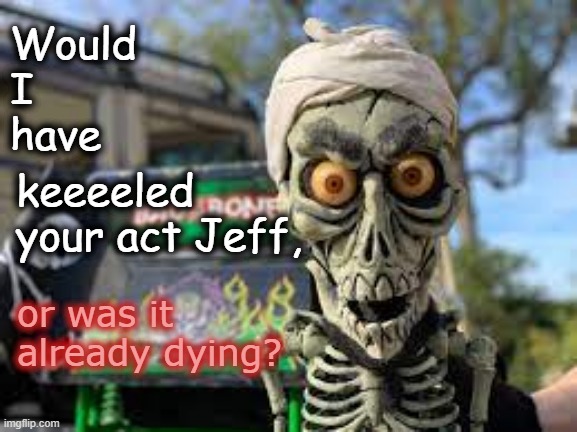 I was a children’s entertainer and educational service provider for 30 years. Mid career a few adults suggested I do what Jeff Dunham does, but I was having too much fun and knew I had found my audience. All you have to be is good for kids. Adults expect more of what they already have or they can be excessively cruel… until you reach the point you can sell tickets.

Your audience preselects you. Kids are easier they don’t know you; as long as you’re good when you hit them cold. Adults not so much.
I have a feeling Jeff Dunham’s career is dying. Not that it hasn’t been. I feel lucky to have had a 30 year career, with comedy as a large part of it. As I found out when we lived in Nashville, most entertainers thrive a few years at best, then fade. But Jeff’s most recent move is as if Achmed is “keeeeeel”-ing his career due to abandonment issues.
In the recent special Achmed was missing. Why was he sidelined? Just to introduce the new kid? (Love the build on new kid, Jeff. Is that an Axtell puppet? Moving the eyes must be interesting.) Achmed makes the act. Otherwise you’re left with a hyper kid, an insult to even southern rednecks, and a grumpy old guy who, in this case, played Joe Biden.
Everyone knows Jeff is a right winger, and that’s fine. If you run into this special may I suggest you fast forward through his intro? The first five minutes or so were filled with how “some people” find his act offensive, that he made fun of Trump too (Really? Must have missed that.), and other generalizations that were annoying. I’m sure Mr. Dunham would make fun of those generalizations if said to him more from my side of the political divide. Scratch that: he has, and again that’s fine. I can laugh at myself. Jeff can too.
Oh, I don’t care, but unless you’re MAGA that part of the show fell flatter than run over dog on a stick. Please, Jeff; don’t steal that. No sticks shoved up a dog’s pah-toot toot-y toot toot, please.
As an aside, I used to do ventriloquism. He’s gotten pretty good. In the beginning he reminded me of the actors in Avenue Q, only you could tell he was actually trying. A great musical, but the actors in Q don’t even try.
Great musical, BTW.
After you get beyond the lecture the show is mildly funny. No offense taken. Yes, Biden stumbles sometimes when he talks, when it walks. It feeds the tiresome speculation on the right about his mental illness. Trump walked up steps with toilet paper stuck to his shoe, leans forward and repeats his random stock phrases as if his mind is a skipping needle stuck on a record.
All of this is what a comedian would use.
I mildly chuckled a few times.
Why, oh, why would he dump his star? The answer is pretty obvious: not just to introduce a new character. Achmed was obviously birthed by 9/11. Certainly it hurt, but pain leads to some of the best comedy. When families tell tales from the past aren’t they usually about times, when the were happening, were painful? Who best to mock but the terrorists? I have no doubt Jeff may have receive threats.
But now who would a dead terrorist puppet/vent figure remind many people of, could be linked to?
1/6. And they’re not dead, except the supposed hero: no hero at all, Ashli Babbitt. Ashli was warned not to try to break through the door in pursuit of the terrorist’s goal: hang Pence and Pelosi, and whomever they could get their hands on.
The main victims of these terrorists would be the Capitol police, who were doing their job. Especially the dead ones. They are very inconvenient to Jeff’s act right now.
Jeff, apparently, is a victim of his own sense of political correctness. No need in reminding an audience of that, huh, “Jeff fa-fa-fa Dun-ham?”

“Inspection” is a column that has been written by Ken Carman for over 50 years. Inspection is dedicated to looking at odd angles, under all the rocks and into the unseen cracks and crevasses that constitute the issues and philosophical constructs of our day: places few think, or even dare, to venture.
©Copyright 2022 and 2023
Ken Carman and Cartenual Productions.
All Rights Reserved.