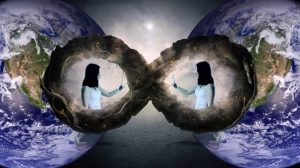 It all starts with the existence of the multiverse, the idea that our universe isn’t the only one out there, in fact, it is just one of many. Within each of these universes is a new reality, one that, while similar to our own, is altered in some way by the decisions that we’ve made.

This is a concept that scientists have entertained and explored for many years, however, a controversial 2010 study revealed evidence that there may actually be other universes in existence.

Consider the last major decision you made in your life. Maybe you moved to a new town for your dream job. In a parallel universe, another version of ‘you’ may exist that chose, instead, to stay in your hometown and pass on the job.

Biden’s Dog Major Will Get His Own “Indoguration”

President-elect Joe Biden isn’t the only one with a big ceremony this month. Ahead of his family’s move to 1600 Pennsylvania Ave., Biden’s rescue dog, Major, is getting an “Indoguration” of his own.

The Bidens adopted Major, a German Shepard, in November 2018 from the Delaware Humane Association (DHA) in Wilmington. At the Inauguration on January 20, he will become the first rescue dog to take up residence at the White House, joined by the Bidens’ other dog, Champ. Was there ANY way he and his enablers would have accepted losing? A rhetorical question like, “Is water wet?” You KNOW the answer.
Early AM, can’t sleep: the TV is my lullaby with New Age music on 856: Direct TV. Or one of the exploratory channels featuring shows like, How the Universe Works or Unearthed. Shows interesting, but not interesting enough to keep me awake.
Scroll.
Scroll.
Scroll.
Hey, I found 3 channels I never noticed before: Idea, SALE and Xtra. Let’s see what’s on them! Infomercial. Infomercial. Infomercial… god, doesn’t Direct TV have enough infomercial channels? Like far more than half of their channels? END_OF_DOCUMENT_TOKEN_TO_BE_REPLACED

A Pro-Trump Militant Group Has Recruited Thousands of Police, Soldiers, and Veterans

Stewart Rhodes was living his vision of the future. On television, American cities were burning, while on the internet, rumors warned that antifa bands were coming to terrorize the suburbs. Rhodes was driving around South Texas, getting ready for them. He answered his phone. “Let’s not fuck around,” he said. “We’ve descended into civil war.”

It was a Friday evening in June. Rhodes, 55, is a stocky man with a gray buzz cut, a wardrobe of tactical-casual attire, and a black eye patch. With him in his pickup were a pistol and a dusty black hat with the gold logo of the Oath Keepers, a militant group that has drawn in thousands of people from the military and law-enforcement communities.

Fascism Scholar: Strongman Trump Radicalized His Supporters; Turning This Back Will Be Very Hard House Speaker Nancy Pelosi is threatening to begin new impeachment hearings against President Trump if Vice President Mike Pence doesn’t invoke the 25th Amendment of the Constitution to remove Trump from office for inciting his supporters to storm the Capitol. Calls are also growing for Republican Senators Ted Cruz and Josh Hawley to be expelled or to resign for supporting Trump’s effort to overturn the election and fanning the flames ahead of last week’s insurrection, and authorities are warning about more right-wing violence ahead of Inauguration Day on January 20. Ruth Ben-Ghiat, a New York University historian whose work focuses on fascism, authoritarian leaders and propaganda, says the storming of the Capitol was “a logical result” of Trump’s legitimization and encouragement of right-wing extremism since 2016. “The threat to democracy is not outside our institutions only. It’s coming from inside,” Ben-Ghiat says.