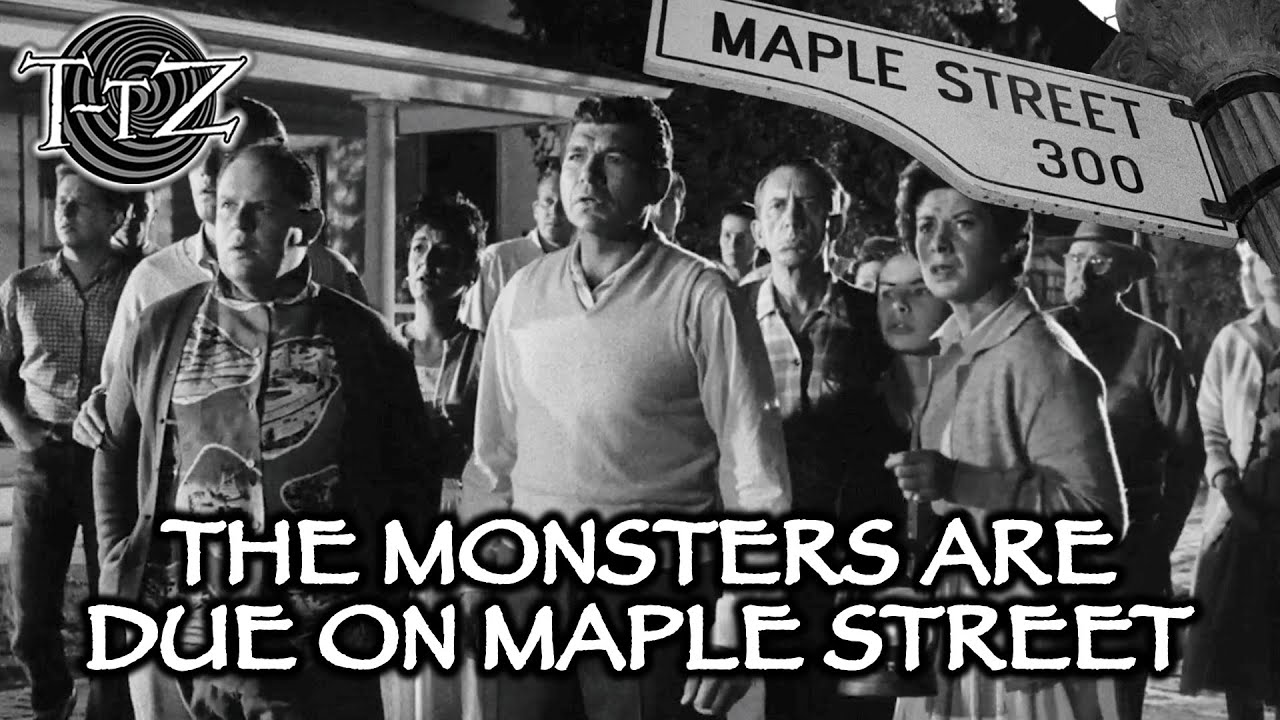 I think it would be hard to argue that one of the top Twilight Zone episodes isn’t The Monsters are Due on Maple Street. So many lessons to teach us. I

feel we need an updated version every 40 years or so; not much changed. It’s perfect and the lessons work well over 50 years later.
Though it may be hard to imagine for those of us on the pro-choice left: misguided though we may think they are, there certainly are good people who want abortion only for when the life of the mother and the life of the child come into play. Only a monster would demand both be sacrificed to some deity’s whim. Even God didn’t demand Abraham kill himself too.
I know of no one on the left pushing for absolute abortion on demand at any point in the pregnancy. Not for wrong hair color, wrong politics, wrong race: but I can imagine some on the most extreme on the right might start demanding that. Maybe that’s a small part of any monster in me, the inability top see beyond my own skew?
I understand the use of propaganda that pushes the concept that exterminating Ukrainians who aren’t Nazis is akin to the attempted extermination of the Jews. I imagine some alternate timeline where the Nazis won and the few Jews left are being hunted for sport. And I have no doubt Putin would consider that for non-Russian Ukrainians: starting with 3rd class citizenship, at best. I also understand extremists in our country may eventually demand the politically incorrect. I can also see a future where the fetus belonging to the politically incorrect may become the exception to other wise bam on abortion.
If we should have learned anything by now it’s that consistency thy name not be human. Something about humanity longs to create monsters where there are none: especially to comply with political agendas.
One of the more current drives is to get everyone to consider LTGBQ-ers to be the monsters. The mobs eager to run, run, run and get them fired, get them banned, I suppose eventually murder them. (“I felt threatened!”) And so much of this is akin to the classroom phenomenon where; if not for one person (“these people”), or one group, everything would be alright. Of course if they ever do go away another target will be chosen, because it’s not about them. It’s about the monsters inside. Preying on us.
In Monsters aliens instigate this.
We need no stinking aliens; we do it to ourselves.
Fear of immigrants is too often another attempt to frame whole groups of people as “other.” Pure villains. Should we do a better job weeding some out? Sure. Put them in concentration camps? No. In trailers with no AC under the hot southern sun? Hell, NO. If you salivate at that option, why not just import Auschwitz ovens, or build our own?
Should conservatives be feared? Having been one in the 60’s: no. In my time as a conservative most of us were seeking rational and civil discussion. These days have brought us to a state where hate framing is all that matters. Frankly, I think we have been on the slide to fascistic hell ever since we decided counting as many of the votes matters far less who gets the Court to decide for them, or who yells, “It is/was rigged!” Yells that Even before the election.
All blacks, all whites, all south of the border immigrants, all left, all right? We make our own monsters: using a Night Gallery-ish word palette.
Another Twilight Zone episode where this works well is Nightmare at 20,000, only this would be where those we are told to fear, told we must hate, are ostracized, hoping they will fall to their own demise. The more this happens the less free our nation becomes.
Pick any topic and these analogies work. And if we ever can back off from this kind of framing, this kind of politics, this kind of demonizing, this kind of being part of a hate driven mob, we will be a kinder, better, more free nation.