Web of Make Believe: Death, Lies and the Internet 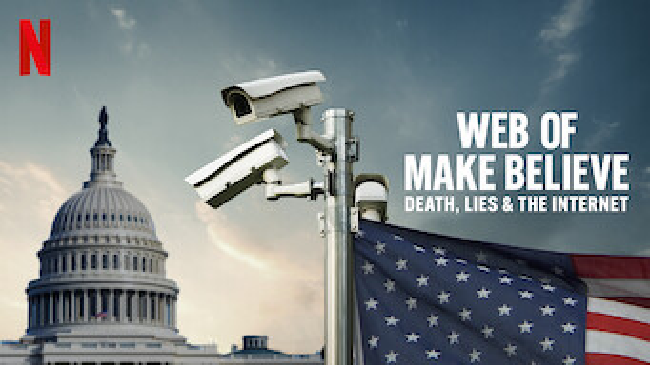 Web of Make Believe: Death, Lies and the Internet is a documentary series revealing how the internet has opened up new pathways for criminals to prey on other people.

Netflix’s official synopsis for the series reads: “Web of Make Believe: Death, Lies and the Internet is a six-part anthology series from director Brian Knappenberger, Luminant Media and Imagine Documentaries that tells stories of people caught in a dark and twisted web of modern misinformation and digital deception.

Haunting, bizarre and up-to-the-moment relevant, the series explores consequences of “SWATing”, takes a chilling trip down the rabbit hole of white supremacy, joins a Federal hunt for the suspect of a brazen IRS heist and investigates the Seth Rich murder set against the backdrop of Russian election interference. Rich with distinctive characters and surprising plotlines, reality is warped when the ordinary American household collides with a chaotic web of misinformation.

Web of Make Believe: Death, Lies and the Internet

1. Death by SWAT  When an online gamer makes a series of fraudulent 911 calls to lure SWAT teams to innocent people’s homes, his targeted trickery turns to tragedy.

2. A Murder in D.C.  The murder of DNC staffer, Seth Rich in 2016 spawns a myriad of unfounded conspiracy theories as the man’s family — and the truth — hang in the balance.

3. I’m Not a Nazi  A woman recounts her journey to becoming a mouthpiece for white nationalist hate speech, work that culminates in high-profile violence and murder.

5. The Stingray, Part 1  From counterfeit Beanie Babies to very real tax fraud: Two skilled hackers revisit the cyber schemes that landed them in the sights of law enforcement.

6. The Stingray, Part 2  The FBI escalates its pursuit of an elusive hacker, but he soon turns the tables by questioning the legality of a key tool in their investigation.

I can’t think of a more timely documentary to watch in today’s age of misinformation and worse, disinformation.  The first three stories are probably familiar to you, if you’ve been paying attention to what passes for politics these days.

The first story is about a gamer who thought it was ‘fun’ to call up SWAT and report a crime that was sure to send an army of armed cops to an unsuspecting person or house.  Eventually someone ended up dead.

The second story is about Seth Rich, the DNC staffer who was murdered in a crosswalk late one night in Washington DC.  The conspiracy-minded clowns like Donald Trump and his cult followers were using the Seth Rich murder to deflect press attention away from the Robert Mueller “Russia investigation”.  The Right was looking for someone to ‘blame’ for leaking thousands of hacked DNC emails to WikiLeaks in the summer of 2016.

The third story is about a woman who got caught up in the genesis of the “Alt-Right” movement, where the former KKK, white nationalists, and other racist and fascist groups tried to rebrand themselves under the “alt-Right” banner with a new, cleaned up image.