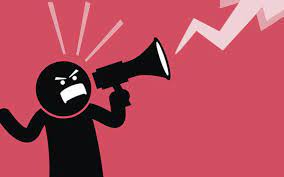 The Topic: What is the OPPOSITE of Communications?

What is the opposite of politics? Used to be religion, but hasn’t been that for a long time, and that time was far too brief. News? BAD guess, try again. Communication? Congratulations! You’ve won no prize, except the respect of the author.
These days miscommunication may be a closer synonym. Misdirection, what about-isms, accusations to distract, politics has become a game of gotcha, often when he who plays the game of “gotcha,” and he who has been “got,” gets nothing. Lies and half truths lie around the battlefield like butchered Confederate and Union soldiers. It’s a metaphor, yet increasingly not so much.
That’s because the only purpose is the opposite of communications. It’s to cut the phone line, smash the cells, bark like a mad mad at he who attempts to discuss: again, metaphor, but increasingly not. The object is shove what we don’t like, or agree with, down a 1984 Orwellian memory hole, or Pravda, which means “truth” when the object is anything but.
Oh, there is a purpose beyond that. When communications is held tight by oligarchs, fascists, Stalinists, authoritarians it has nothing to do with communications.
Today’s communications no longer are akin to the rational discussions held by people like Buckley on any side of the political divide where opposite sides discuss and debate. Pundits and pols have abandoned a Firing Line model and gone to a much more profitable model: hate.
My favorite analogy is a feudal castle where the serfs think they are protecting themselves from evil. But sometimes all they were doing is protecting the king, as they toss flaming turds and rocks down on serfs from another castle… also protecting their king. One is pure good, the other pure evil, just flip the coin as to which is which. Only sometimes the king, in this case, may be in cahoots with the king of the other serfs.
Keep them occupied, give them a fake purpose, use them up like human babies tossed into a fireplace for warmth.
The answer as to why is simple: money, but complicated; some truly believe their BS and want to exterminate all who stand in their way. Some of the media, and some leaders, these days are similar to Prince Vlad the Impaler who stuck huge tree height sticks up the butts of anyone who displeased him. Catholic, protestants, someone who tried to make the message less palatable… all died while he dined, laughed an watched.
While our carnage hasn’t hit that level: yet, our rhetoric is meant to do the same, and to what purpose? While “owning” the other side, an impossible task, may give you a shiver of Marquee de Sade pleasure, you can’t “own” anyone. If your intense focus is “owning” the other side, don’t they own you?
All of this is the opposite of communications, only grows more hate, and on a larger scale heads us down a dark trail to authoritarian hell.
No matter who “wins,” no one wins.

Ken Carman is a 76 graduate of SUNY @ Plattsburgh School of Communications. He did have good grades, but not grand. Ken specializes in taking what he has learned from music, being a music business student in Nashville, an English major at two colleges, a Communications/Mass Media Major and seeing what PhD’s might not see. Think of it like horses at a track with blinders on. They see the track, where they need to go. Like most generalists, Ken sees beyond the track and how it all can fit together in unique ways. In the future expect more off kilter editions. Ken hopes his perspective may widen the perspective of others, and the perspectives of his readers do the same for him. Ken lives in Eagle Bay and Beaver River, NY. He is formerly form Nashville, TN, then Old Forge, NY, then Utica, NY where he met Millie the marvelous, and born in Nyack, NY.
©Copyright 2022
Ken Carman and Cartenual Productions
all rights reserved