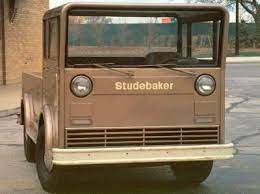 Note: the picture shown is not the enclosed version of the Autofamilia that Studebaker had planned.

Our Topic: Advancements That Slip Through the Cracks

I distinctly remember an accident in an old van my brother borrowed from my Uncle Theron. Reminds me of the Studebaker Autofamilia: a vehicle Studebaker had planned, but never sold. Seats could be shifted around in Uncle Theron’s old van: not a Studebaker. The back bench had been shoved against a wall so we could load it down with newspapers for the church newspaper recycling drive. When the driver slammed down his pedal half a mile away he didn’t slow a bit. He slammed into the side and threw me across the back of the van.
I was fine, the van wasn’t. Recriminations followed, unheard by me, and maybe my brothers too.
I can remember every second, the racing car roaring out from under a Thruway bridge on Route 59, and hitting us full force.
Eidetic memory: where you remember everything, even down to very minor details, like it was raining in the morning, February 3rd, when you were 3. You’re now 70.
Eidetic memory: I don’t have it, though I think I have a minor case of it. So much I remember, like the tables at my elementary that came down from the walls, had a green with streaks of milk white vinyl. It can be embarrassing all the things I remember.
I think it was buying then driving Harvey Robin Churchill: our 63 Studebaker Champ truck, that made me realize how cars have changed. The changes seemed to have crept in slowly, every year some slight change. The changes are remarkable if you compare a 1963 to a 2023. Oh, I knew about them intellectually, but try a true manual steering on a 50’s/early 60’s truck! It is quite an ‘experience.’ Great exercise; and it makes you appreciate power steering, understand why truckers used to have muscular arms.
Small, driver side only, side view mirrors. Makes one really appreciate big, double side, sideview mirrors.
It seems odd that cars are going away in favor of SUV’s, perhaps because they are less regulated, or at least they were. And electrics are on the rise, despite naysayers who think they’re smarter than engineers who work for Ford, GM, Volvo, Nissan, Tesla…
And, except for those Ford/Nissan/Mercedes truck like “vans” that all have the same body provided by some vender; whatever happened to the full size van? Gas guzzling may explain that, but now we’re going electric perhaps they’ll return. Easier to do the Autofamilia/Uncle Theron’s van shift the furniture around when the batteries and most of what make you go is under you. Makes roasting the occupants easier too if lithium maintains its fire prone reputation.
Frankly I think that as over blown and gas tanks that are also underneath occupants.
Carbs that dry out so you have to feed a little gas into one to start. The car staring fluid really doesn’t work all that well if the vehicle sat for a week or more.
Every improvement has issues. Computers help cars last longer, start easier, but if it won’t start don’t try pouring gas down an invisible carburetor. Opening a hood makes one go, “Huh???” Unless you have a device to read codes, and you know how, forget it. And occasionally the codes are wrong.
I feel great empathy for mechanics. What new gizmo do they need to buy tomorrow? What new tech to understand and learn?
Today’s mechanics amaze me.

The Automotive Critic is a column by Ken Carman, who has been writing a weekly column since 1972 called Inspection, as a beer judge several beer judging and beer industry-based columns. Ken is also the author of Autocide: which he started researching over 20 years ago. Autocide is alternative automobile history filled with funs, odd twists and quirky characters. He has been into cars, working with cars as part of his job, since he bought his first car: a 61 Lark, at 14. Mr. Carman lives in Eagle Bay and Beaver River, NY.
©2022
Ken Carman and Cartenual Productions
all rights reserved