The Man in the High Castle 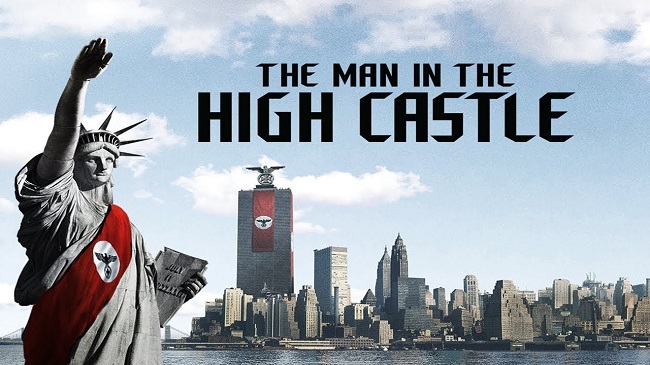 The Man in the High Castle is an American dystopian alternate history television series created for streaming service Amazon Prime Video, depicting a parallel universe where the Axis powers of Nazi Germany and the Empire of Japan rule the world after their victory in World War II.  The series is based on Philip K. Dick’s 1962 novel of the same name.

Set in 1962, the series’ main setting is a parallel universe where the Axis powers have won World War II in 1946 after Giuseppe Zangara assassinated the United States President-elect Franklin D. Roosevelt in 1933, which creates a series of developments that include the Germans dropping an atomic bomb on Washington, D.C. (now renamed “District of Contamination”). The German Reich extends to Europe and Africa and the Empire of Japan comprises Asia, but most of the series is set in the former US and in Germany proper.

Eastern and Midwestern North America is a colony controlled by the Greater Nazi Reich (GNR) under an aging Führer Adolf Hitler. The colony, headed by a “Reichsmarschall of North America”, is commonly referred to as “Nazi America” or “the American Reich” and its capital is New York City. The Nazis continue to hunt minorities and euthanize the physically and mentally sick. The superior technology of the Germans is highlighted by the use of video phones and Concorde-like “rockets” for intercontinental travel.

The US as depicted in the television series. Though Denver is the capital of the Neutral Zone, Canon City is a major setting.

A Neutral Zone, which encompasses the Rocky Mountains, serves as a buffer zone between the Japanese Pacific States and Nazi America due to Cold War-like tensions between the German and Japanese blocs. Another buffer zone is present in the Urals.

Films collected by the eponymous “Man in the High Castle” show views of numerous other Earths, including some where the Allies were victorious, some featuring executed Allied leaders (such as Winston Churchill and Joseph Stalin), and some where an American resistance is doing well.

Man in the High Castle

2015 | TV-14 | 4 Seasons | Sci-Fi TV
Starring: Alexa Davalos, Rupert Evans, Luke Kleintank, DJ Qualls
Creators: Frank Spotnitz
DJ’s Review:
I am a sucker for any and all time travel stories.  I am fascinated by the idea of parallel timelines and universes.
What if the Allies had lost World War II?  What would our world look like now?
Disclosure:  I was one of the sound engineers on this series.  It was produced here in Seattle, and filmed mostly in Monroe, Washington.