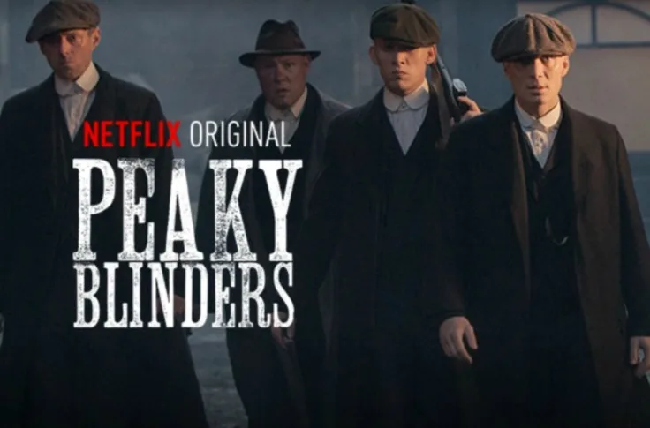 Peaky Blinders is a British crime drama television series created by Steven Knight. Set in Birmingham, England, it follows the exploits of the Peaky Blinders crime gang in the direct aftermath of the First World War. The fictional gang is loosely based on a real urban youth gang of the same name who were active in the city from the 1880s to the 1910s.

Peaky Blinders is an epic centered on a crime family of mixed Irish Catholic and Romani origins based in Birmingham, England, starting in 1919, several months after the end of the First World War in November 1918. It centers on the Peaky Blinders street gang and their ambitious, cunning crime boss Tommy Shelby. The gang comes to the attention of Major Chester Campbell (Neill), a detective chief inspector in the Royal Irish Constabulary sent over by Winston Churchill from Belfast, where he had been sent to clean up the city of the Irish Republican Army flying columns, the Communist Party of Great Britain, street gangs, and common criminals.  Winston Churchill (played by Andy Nyman in series 1 and Richard McCabe in series 2) charged him with suppressing disorder and uprising in Birmingham and recovering a stolen cache of arms meant to be shipped to Libya. The first series concluded on 3 December 1919—”Black Star Day”, the event where the Peaky Blinders plan to take over Billy Kimber’s betting pitches at the Worcester Races.

2013 | TV-MA | 6 Seasons | Crime TV Shows
Starring: Cillian Murphy, Sam Neill, Helen McCrory
Creators: Steven Knight
DJ’s Review:
I have been purposely ignoring this show since it first came out in 2013.  The production of this series is great, but it has taken way too long to put it out.  Six seasons in almost ten years, and they still aren’t quite done.  Instead of a seventh season, they intend to wrap the story up in a full-length movie tentatively slated to come out sometime in 2024 or 2025.  Or 2035, who knows?

It is important to know up front that this story is LOOSELY based on a real-life crime gang that ended prior to the First World War.  The story for this particular series takes place just after the war and the twenty years that followed.

It explores the very real events of fascism and communism sweeping not only Europe, but right here in the US as well.