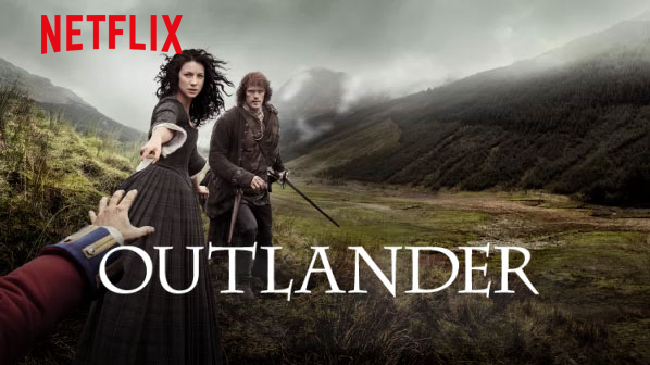 Outlander is a historical drama television series based on the ongoing novel series of the same name by Diana Gabaldon.  Claire Randall, a married former Second World War military nurse in Scotland who, in 1945, finds herself transported back in time to 1743. There she encounters, falls in love with, and marries a dashing Highland warrior named Jamie Fraser, a Tacksman of Gabaldon’s fictionalized version of Clan Fraser of Lovat, and becomes embroiled in the Jacobite rising.

2014 | TV-MA | 5 Seasons | Romantic TV Dramas
Starring: Caitriona Balfe, Sam Heughan, Tobias Menzies
Creators: Ronald D. Moore
DJ’s Review:
I cannot say this enough:  I am a sucker for time-travel shows.  It doesn’t matter if it is science fiction with machines, or supernatural using magic or some other unexplainable force.  Time travel, for whatever reason is fascinating to me.  Couple that with a good story line and gratuitous 18th century romance in the Scotland Highlands during the Jacobite uprisings, and we have a winner.
This series originated on Starz where it has run for six seasons so far with a seventh coming right around the corner.  It has been re-syndicated on Netflix, where the fifth season recently dropped.  I am just now finishing up season TWO, so I have quite a bit more to go.