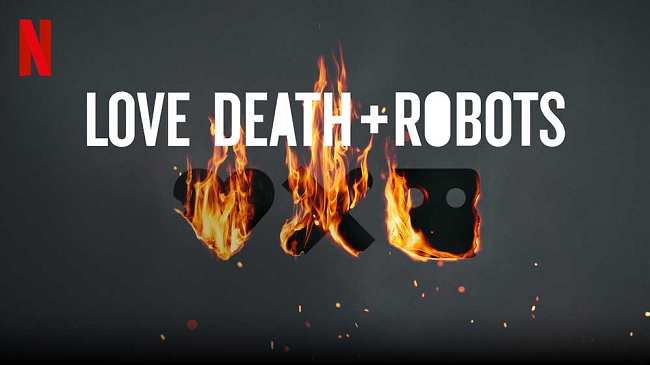 Love, Death & Robots (stylized as LOVE DEATH + R?BOTS, and represented in emoji form as ????) is an adult animated anthology streaming television series created by Tim Miller and streaming on Netflix. Produced by Blur Studio, it consists of stand-alone episodes that contain different narrative and animation and are produced by different animation studios from a range of countries, exploring diverse genres particularly comedy, horror, science fiction, and fantasy. Each episode is connected to the themes of the titular subjects matter. However, not each episode includes all three topics.

The animated series consists of stand-alone episodes, all under 22 minutes long, and produced by different casts and crews, though some episodes may share certain crew members. The series title refers to each episode’s thematic connection to the three aforementioned subjects, though not every episode contains all three elements.

This collection of animated short stories spans several genres, including science fiction, fantasy, horror and comedy. World-class animation creators bring captivating stories to life in the form of a unique and visceral viewing experience. The animated anthology series includes tales that explore alternate histories, life for robots in a post-apocalyptic city and a plot for world domination by super-intelligent yogurt.

Okay, I am NOT usually one for animated shorts, series, or movies, but THIS will have to be an exception.  Love, Death + Robots is a three-volume collection of roughly 20-minute shorts that cover all sorts of different genres.  Some are in cartoon form, others in more artificial form.  There is a LOT of humor, even some political references that cater to the entire political spectrum.  There are a few shorts that I hope are out in YouTube so I can post them on FaceCrack.

This is well-worth the watch.