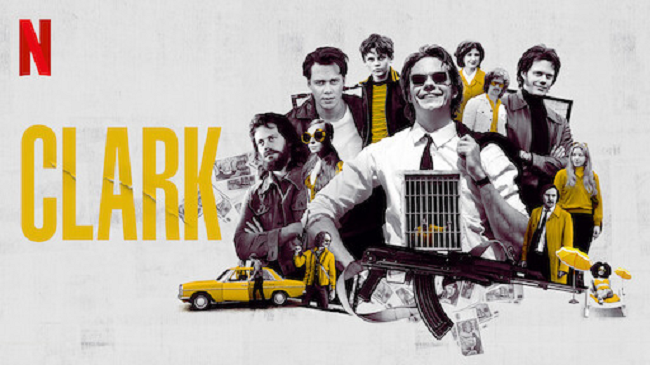 This is the incredible story behind Sweden’s most notorious gangster, Clark Olofsson, whose infamous crimes gave rise to the term “Stockholm Syndrome”.

The fictional drama series Clark follows the man behind the expression “The Stockholm syndrome” on his life journey as he fooled all of Sweden to fall in love with him.

Despite several counts of drug trafficking, attempted murder, assault, theft and dozens of bank robberies he was able to make people believe him.

Based on the truths and lies revealed in Clark Olofsson’s autobiography the series provides a fictional take on one of the most controversial personalities in contemporary Swedish history.

With wit to match his skills with manipulation, this series will take the viewer on a journey back to the swinging 60s and 70s and onward into the darkness of the late 70s and 80s. It’s the Clark Olofsson story we have not seen before. All told by the Stockholm syndrome man himself – the puzzling man behind all the crimes.

2022 | TV-MA | 1 Season | Crime TV Shows
Starring: Bill Skarsgård, Vilhelm Blomgren, Hanna Björn
DJ’s Review:
This is a fictional story based on the real-life autobiography of Clark Olofsson, a notorious bank robber in Sweden between the 60s and the 90s.
I would consider this a “must binge” series to watch.  It is a “limited series” meaning that Netflix has no intention of coming out with another season — mainly because the story is fully covered, and unless this 75-year-old man still has another crime spree in him, there really isn’t much more to tell.

Although Clark is a fictional series, it is based on Olofsson’s autobiography where he wrote about the truths and lies he told to fool all of Sweden to fall in love with him, despite several counts of drug trafficking, attempted murder, assault, theft and dozens of bank robberies.  The story is hilarious in places, I couldn’t help but laugh my ass off.